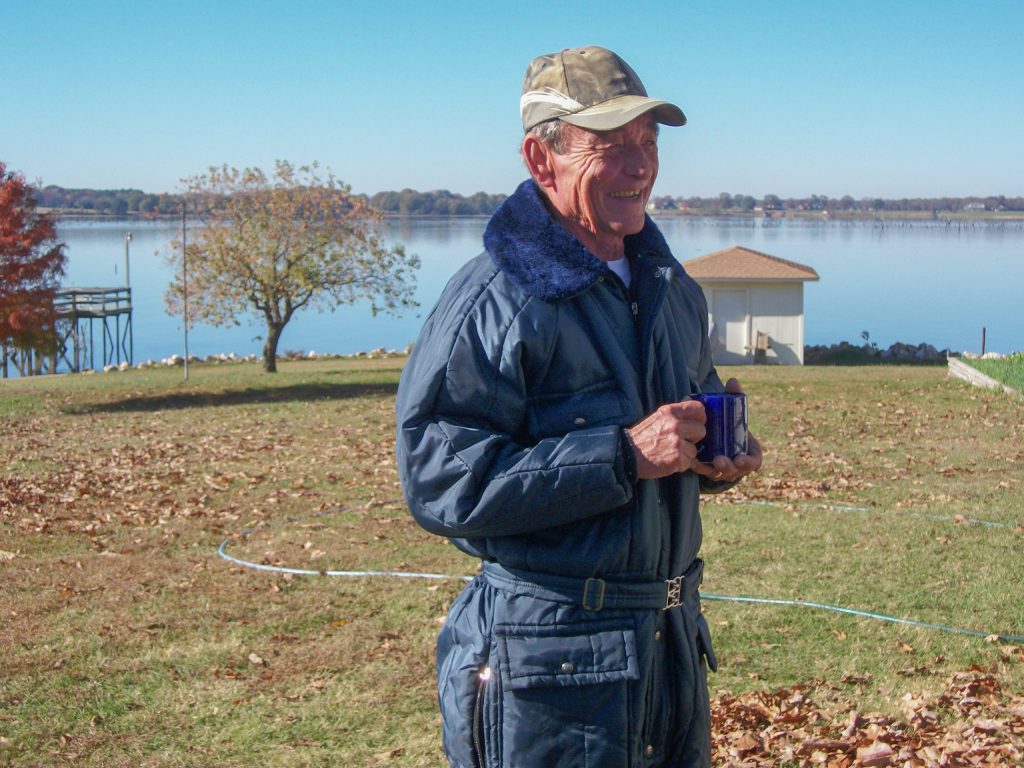 Raymond Joseph Vasil lost his fight with cancer on October 26, 2021. Ray was born on March 3, 1943 in Cleveland, Ohio and his family moved to Fort Worth, Texas when he was just an infant. July 4, 1970, he married the love of his life and soul mate, Dale Elizabeth Brown and they lovingly raised their three children in Arlington, Texas. Ray and Dale purchased what would later become their retirement home in Emory, Texas in 1995. It was their weekend retreat until Ray retired from Bell Helicopter as a specialist painter where he had worked for 43 years beginning when he was only 18. At the age of 61, Ray and Dale sold the home in Arlington where the kids were raised and moved permanently to Emory. When he was asked what he was going to do each day after retiring and living at the lake, he would smile and say, “Whatever I want.”
This famous phrase “whatever I want” resulted in the purchase of almost 50 acres of land just outside of Alba, Texas. He kept himself busy and smiling as he cleared timber, dug a huge one-acre pond (mostly with a tiny tractor that was NOT built for that job), and planted many fruit trees and berries including 167 paper shell pecan trees. This hard yet rewarding work outdoors became one of his greatest enjoyments and he said, “I’ve never felt closer to God than when I am working on the land.” Some of his favorite hobbies throughout the years included coaching and reffing youth soccer, mentoring, gardening, fishing and hunting. Ray and his best friend and neighbor, Martin, kept busy every fall processing deer for neighbors and friends from miles around. Ray was always selflessly lending a helping hand whenever it was needed. His three favorite words were, “Happy, Happy, Happy.” He always wanted everyone to be happy! He loved to play cards, mostly poker, with his children and grandchildren and he loved playing his Elvis records. Ray is survived by his devoted wife, Dale, their three children, Stacie Rudloff, Eric Vasil, and Bret Vasil, as well as five grandchildren, Sierra, Derek, Skylar, Kaylie and Holden, and one great grandchild, Peyton.
Saying goodbye is difficult, but we have the privilege and honor to carry on Ray’s legacy by loving and serving others well, working hard in all that we do, and putting our families and loved one’s needs before our own, just as he did so well throughout his 78 years of life. While gifts, flowers, and other thoughtful items are greatly appreciated, we kindly ask instead that a donation be made to the American Cancer Society or St. Jude on Ray’s behalf to aid in cancer research. There will be a celebration of life ceremony held on December 10, 2021 at 2pm at St. John The Evangelist Catholic Church in Emory, Texas.

My brother-in-law Ray was indeed a friend and brother! My heart expands when I think of him and remember his kindness and generosity. He was blessed with a loving family, many friends, and a beautiful home in Emory. I’m going to miss him.
Deb Christopher

Uncle Ray – you are greatly missed – all of my memories of you are always being happy , making funny jokes and of you and Dale’s always in Love – Aunt Dale , sending you prayers all the love and strength in this most difficult time – Love you !
To Stacie, Brett and Eric , my heart and love goes out to you and to Sierra , Derek , Kaylie , Holden , Skylar and Payton – sending hugs and love you guys had a great loving , happy and fun grandpa that left a beautiful
Legacy –
Our prayers are with you all and may de Blessed mother be there for you in these challenging and heart aching moments –
Love you uncle Ray , until
We meet again –
With Love
Cindy & Cesar

My Brother Ray is greatly missed by all including his brothers and sisters. The first born was Jacquelyn Vasil Canamar (1936), John Michael Vasil (1940) and Raymond Joseph Vasil (1943). But the depression & WW 2 as well as other problems ended my mothers first marriage & she moved the family to Ft. Worth TX. from the northeast, where later she met and married my dad and had Mary Baskin Harmuth(1946), George Baskin (1951) and Martin Baskin (1955). Ray loved to share with family and friends. When Ray retired he moved to his dream lake house and bought more land for hunting as well as growing all sorts of produce, including fruits & nuts which he shared with his family & neighbors. Ray set the bar up high for the rest of us to follow, R.I.P. until we see you again!!!

Uncle Ray, you were one of the kindest, most comfortable-to-be-around people I’ve ever known. You were always funny and friendly, capable and interesting, playful and giving. Your passing is an enormous loss.

My thoughts are with everyone that is suffering from that loss. Love to all of you.

Jim and Mary Harmuth family
10:41am

I am Ray’s First sister of my Mom and Dad Baskin, Mary P. Baskin- Harmuth and we were just three years apart with Ray Joe being those three years older than me. We had a little sister born after I was, she died in her 7 1/2 month of her pregnancy due to her cord being wrapped around her neck and choaking her to death almost time for her to be to be born and was anxiously awaited by all of us. George T. Baskin was born January 23, 1951, on our oldest sister’s birthday, Jacquelyn J. Vasil’s Birthday and they were always close, too. Then Martin Anthony Baskin was born August 11th, 1955. He was the baby of our family. Ray was the 4th child of John and Angela Marie Soboslay Vasil Baskin then, Their first child was a son, named Jordan Anthony Vasil’s and he only lived two days and did not even breast feed and died suddenly on the second day of his birth, during the World War II. HE is buried in Cleveland, Ohio, on top of our Mom’s father’s casket, This was Michael Nicholas Soboslay and he had complications of heart problems and diabetes too, like lots of us inherited from him. and as he died before our Mom graduation and married John James Vasil too. But we all loved him from his stories of his life and he was a devoted family man himself. We loved Ray so much and he was to have the same kind heart his grandfather Soboslay had and was the peacemaker all his life in our family, as our Grandfather and Grandmother had 10 children to love and care for too. Ray had a heart as big as life and everyone loved him so much and more. He suffered lots with that cancer and died from it. We all are so much better for having Ray Joe, as our beloved Brother and everyone loved him forever too. Rest in peace and know you will always be love so specially and missed forever but you were the BEST!!! Love you Dale too, you were close with Jim and me too and we love you forever always and more …. Prayers for all of you who we loved so much too!

It was Leota and my pleasure to know Ray and Dale through my parents and brother. Ray was always willing to help my mother and brother after my dads passing. His giving spirit and sincere desire to help others will be always be remembered and so appreciated. Our lives are so much better from knowing Ray.

Ray was absolutely in love with his family, their happiness was his first and last priority. Dale always referred to him as my Ray and he was smitten with her as well. I consulted Ray about all things gardening and it was always true advice. He shocked me with the seven pound cauliflower gave me after learning I loved them. I was happy to stay withDale as he went to chemo, and offered to go and stay with him but he refused. I believe he hung on as long as he could for Dale and wanted her to be ok. I loved his sense of humor and his kindness. rest in Gods arms my friend.