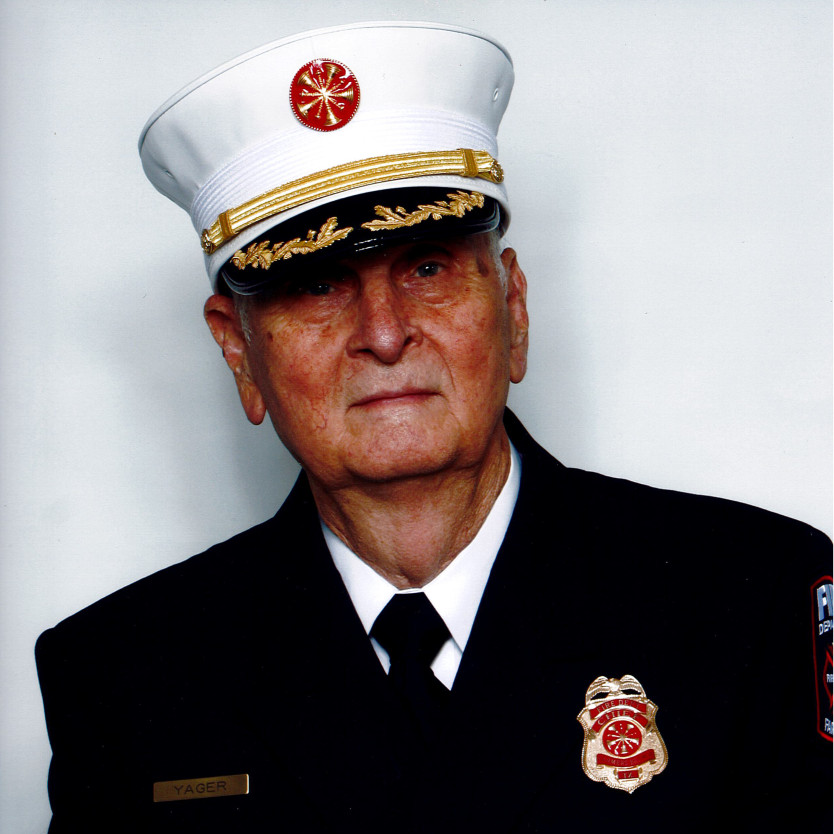 Bob was a native of Farmers Branch. He was proud to be among the third generation of his family to be born and reared in the Farmers Branch area.

During his tenure, Chief Yager was instrumental in the process of getting some of the leading fire protection codes of the time passed.  In particular, this included a code having a requirement of retroactive installation of smoke detectors in homes and apartments in the city.  Additionally, under his leadership and with his guidance, Farmers Branch became the first city in Dallas County to require sprinkler systems in all multi-story buildings.  Furthermore, Chief Yager guided the Farmers Branch Fire Department in establishing ambulance service as an integral part of its routine services.  During the time period this was considered an innovative and novel concept.  Finally, the Chief was among the first to advocate for and provide firefighters with the latest personal safety equipment available.  At the time, this included fire retardant firefighting gear and self-contained breathing apparatus.

It was with a sense of pride that Bob helped in organizing the Farmers Branch City Employees Federal Credit Union.  He was honored to serve as its original President – a term that lasted for 10 years and ended upon his retirement from public service.

After serving for more than 32 years with the Farmers Branch Fire Department, Bob Yager retired in 1981.  He relocated to Mineola, TX.  There he owned and operated two successful businesses along with his wife Aline and son Ricky.

It was in 1986 that he retired once again and sold the last of the businesses.  He spent his remaining years enjoying his family and practicing two hobbies which he enjoyed tremendously – woodworking (building beautiful furniture for family and friends) and fishing.  Moreover, Fire Chief R.L. “Bob” Yager always endeavored during those retirement years to keep contact with the many friends that he had made in his personal and professional life.

It is with heavy hearts that we lay to rest the man that meant so much to so many.  May his legacy continue to live on in those that knew and loved him.

Our hearts are heavy & broken to hear of the passing of Chief Robert Lee (Bob) Yager. Chief Yeager hired my father, Captain Kenneth H Chambers to the Farmers Branch Fire Department. Chief Yeager was truly a visionary in the Fire Service and really loved those who served. Chief Yeager we are forever grateful for your service and friendship over the years…may you rest in peace and know you will always live in our hearts. Les, Ricky & family we lift you all up in love and prayers. May God give you all comfort & peace, Captain Kenneth H Chambers & family