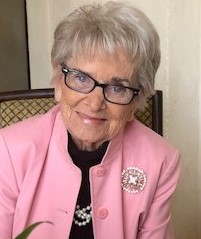 Sweetest. Lady. Ever. Adored Mama and ally to everyone…family, friends, students, strangers, you name it. Anyone would look at her and want to smile, even before she spoke. When she did, you were blessed.

Martha was superwoman with a smile. She was an unconditional giver who never complained (ever). Martha was the most positive person her family knew; she was like sunshine. It’s no wonder why people were drawn to her. Jesus said the greatest commandments were to love God and others. That was Martha. She lived life this way…every day. It was her gift to this world. It was the way that she left people she met feeling as though they were the most special person in the room. Her baby blue eyes and sweetest smile attracted you to want to stay in the moment and listen to what she had to say because it was meaningful.

Martha came into this world on June 27, 1927. On a chilly Tuesday in November, Jesus carried her home just as the sun was rising over the pond outside her window; she was 95. The days she spent between those dates were performed with grace and kindness that touched everyone who crossed her path in heartfelt ways.

Martha’s story begins in a small setting in West Texas. She was born in Belton, TX but was raised in Lamesa, TX. Her parents, Carey and Zola Cox Terry, were devout Baptists who instilled in their children the value of serving others. She had 2 brothers, Joe, who became a well-known doctor to his community, and Dan, an accomplished architect. Their modest home was full of faith, humility, and humor.

Martha’s young journey then led her to Texas Tech University, where she studied English. There she met the love of her life, Hugh Monroe. On December 23, 1947, they became husband and wife. Martha and Hugh soon began to have babies…lots of them (seven, in fact). Martha’s unwavering ease at juggling life with a big family was remarkable. Not only did she take care of the kids in the most amazing way, but she also obtained a master’s degree in education (long before you could do this easily on the internet), while working as an English teacher in the public schools and professor at a community college. Martha made English interesting and fun; she taught with joy. She engaged with her students to help them see their potential and make each one feel special and smart.

After retiring, the rest of her days were filled with traveling, spending time with her husband and family, being a kind neighbor (you would be so lucky to have her deliver homemade pralines to you every year at Christmas), and a faithful friend at church.

Later in Martha’s life, her passions were crossword puzzles, Jeopardy, Texas Tech (sports enthusiast), St. Louis Cardinals, Alan Jackson music, church, and Jesus. Her greatest interest was anything having to do with her family, especially telling sweet stories about her husband (God knows how she loved that man).

She is survived by her seven children: Teresa, Kim, Mandy, Amy and her husband Bailey, Tom, Meg, and Sara and her husband Robby; 13 grandchildren; 7 great grandchildren and many nieces and nephews. Family celebrating in heaven with her today are her parents, brother Joe and his wife Lou, brother Dan, and most importantly, her beloved husband Hugh.

Farewell, lovely Martha. You will be deeply missed. The world will never be the same without you. Let us remember her by following in her footsteps by bringing beautiful colors of affection and love into a gray world that genuinely needs it.

Special thanks to the wonderful people who cared for Martha. To Lillian, your loving service to Martha for two years brought peace to our family; we knew she was in capable hands while under your care. Thank you for loving her as though she was your own Mom. In the last month of Martha’s life, she was diligently cared for at T. Boone Pickens Faith Presbyterian Hospice in Dallas. Kylie and all the staff gave devoted attention to Martha in her last days that was beautiful and respectful. Above all, we cannot express in words the gratitude we have for our sister, Sara, who was Mom’s greatest warrior.

Family and friends can celebrate her life through visitation at North Dallas Funeral Home on November 28, from 2:00 pm to 5:00 pm.

A private funeral service will be held for family only.

Memorial donations can be made in the name of the Hugh and Martha Monroe Scholarship Endowment at Texas Tech University’s Whitacre College of Engineering.

Love to all of you. So blessed to have known Martha through her wonderful children. Sending love and hugs from Jan snd Larry Flowers

Dear Kim and Family,
I am so sorry to hear of your beautiful Mother’s passing. She was always such a sweet and lovely lady. I always enjoyed the times when we had our Mother-Daughter luncheons. Martha was interesting, charming, and wanting to know more about what everyone was doing at that stage of life. I’m sorry I didn’t get to see more of your Mother. Please know I will be praying for peace and understanding for the family. I know Martha will be greatly missed by all❤️
Love and Sympathy,
Alice Link

Thank you for these sweet thoughts and for your prayers. So thankful for our friendship.
Kim

Our hearts are broken and tears flowing, both in celebration of a life well-lived and being home with Jesus as well as tears of loss over a beloved friend. She was such a sweet inspiration to all who had the blessing of knowing her. Her shared passion of all things Texas Tech is what initially connected us, and the beloved friendship that unfolded is what drew me to sit by her, or the pew behind her, each Sunday at church (at the very front of the sanctuary…not the typical choice seat for a mother of 3 young girls. ha ha!) Oh, how she will be missed, yet what joy we have in knowing she is reunited with her beloved Hugh and safe in the arms of Jesus in Heaven. Our prayers are with each of you during this delicate and grievous time. It’s such a delicate balance to grieve, yet celebrate, a life well lived. May you experience the comforting arms of Jesus holding each of you close and may His perfect peace envelope you in tender ways. Our prayers are with you as you navigate this new season. (And Rob and I will be cheering extra exuberantly for the remainder of the Texas Tech football games of the season, just in her honor.)