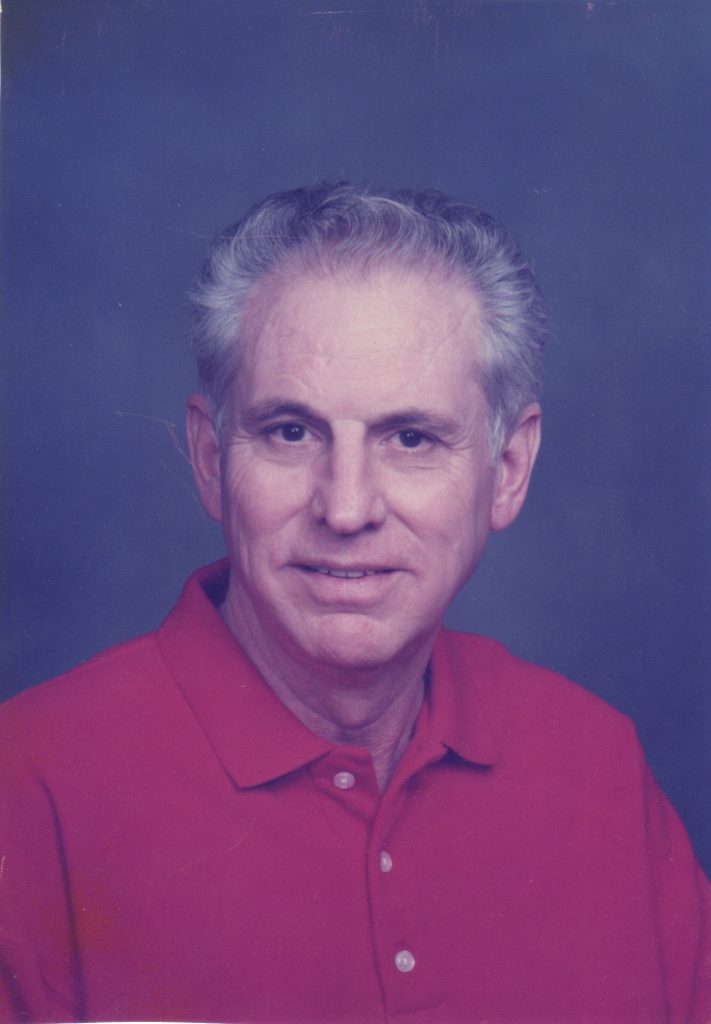 Jerry was born on February 12, 1930, the second of four children to Velma and Benjamin Fournier. Following graduation from Notre Dame High School he enlisted in the US Navy, serving as a radar technician on the USS Palau, an escort carrier. A Korean War veteran, he served in the Atlantic theatre.

Jerry met Peggy in early 1953 on a blind date. Peggy fell in love with his curly black hair and gentle disposition, and they were married on May 23, 1953, at Nativity Cathedral. Gerald Jr. was born in July 1954 in Mississippi followed by
Susan a year later in Louisiana and finally Betty five years later in Texas. Jerry would later joke that after 3 children in 3 moves it was time to stay put!

Jerry earned a BSEE at LSU in 1956 on the GI bill and a MSEE at SMU in 1960. He started his engineering career at Collins Radio but spent most of his career at Texas Instruments in government and defense programs. He was one of those
lucky people who loved his work that constantly challenged him. A devout Catholic with a strong moral compass, Jerry loved Math, Sudoku, the Dallas Cowboys, and chocolate. More than anything he loved Peggy and his family. When he married Peggy, her father warned him that Peggy didn’t listen, and she was spoiled. Jerry smiled and assured his future father-in-law that he’d take over spoiling Peggy where he left off.

Eternal rest grant unto him O Lord, and let perpetual light shine upon him. May his soul and the souls of all the faithful departed, through the mercy of God, rest in peace. Amen.
Dear Fournier Family,
Please accept our sincere condolences and prayers during this difficult time as you grieve the loss of your dear, sweet Father.
Because we will not be able to attend the funeral, I wanted to write to you a few lines which I hope will provide you some comfort and, perhaps, a smile.
I want to begin at the end — the last time I saw your Dad. It was before the pandemic, at Saturday evening mass at Mary Immaculate. I used to take my Dad to Mass after he was no longer able to drive. Many times I would see your Dad walk into the church, with the aid of his walker. I marveled at his determination to get to church and to make the long, tedious walk to find his seat. It was a true witness of the strength of his faith. He used to sit on the right side of the church towards the back. Many times, he would get to his spot, look around and notice my Dad sitting in his spot on the left side of the church. When he saw my Dad, he would get up, grab his walker and begin the long, slow walk to visit my Dad. When he finally made it all the way over to Dad he would smile that big, beautiful smile he had and say “Hi, Charley! How are you doing?” Dad was hard of hearing, couldn’t see all that well and had trouble finding words but he clearly recognized his old dear friend. Dad would say hello and they would exchange a few kind words before it was time for your Dad to begin the trek back to the right side of the church. Their conversations were never long as neither one had their loving wives with them who, for many decades, had carried the conversations while your Dad and mine waited patiently in silence. On almost every occasion of these brief beautiful conversations, your Dad, after he had talked to my Dad, would turn to me and tell me, “Your Dad is the first person I met when we came to Mary Immaculate.” That was a very, very long time ago but that meeting started a lifelong friendship of two men and their families. We went to Mary Immaculate together — the church and the school.
My brother Chuck was in the same class as Jerry Jr. My sister Jeannie was in the same class as Sue. I think that my sister Beverly was in the same class as Betty and I was in the same class as Betty’s husband, Brian. Your Mom and Dad were the Godparents of my sister Rita — and we were all jealous about that because your Mom and Dad always gave Rita gifts on her birthday and at Christmas while our Godparents were, let’s just say, not as generous. When you all would take your annual vacation to Mississippi , I had the wonderful (and lucrative) job of watering your Mom’s plants on and around your back patio. My brother and I would also take over Jerry Junior’s paper route. I felt so fortunate to have two paying jobs — high cotton in those days!
But before I close this lengthy post, please indulge me as I tell one last story that came from one of those pre-Mass encounters between your Dad and mine. It occurred at a time when both men were caring for their wives who were both too ill to accompany their husbands to Mass. As always, your Dad had worked his way across from the right side of the church over to me and my Dad on the left side. The two old friends talked briefly and then my Dad asked your Dad “How’s Peggy doing?” Your Dad indicated that your Mom was about the same, which meant that she was not doing well. Your Dad then asked my Dad, “How is Phyllis doing?” My Dad gave your Dad a very similar response as Mom was also not doing well. There was a pause in the conversation as both men knew the pain that they shared caring for their wives. At that point, a beautiful smile spread across your Dad’s face and he said, “This is what we signed up for.” It was simple, beautiful and without a hint of bitterness. It was a wonderful statement that your Dad and mine were, despite all the incredible difficulties, persevering to the end to be faithful to the vow that they made to their wives to be faithful “in sickness and in health.” Your Dad was faithful to the end. He was a good man and I feel very very confident that he has already heard these words from Our Lord and Savior Jesus Christ, “Well done my good and faithful servant!”
May God bless you all today and always!
Tom and Mary Brandt

Dear Tom and Mary, Thank you for your beautiful message. You have no idea how much it means to us.
Our mothers chose amazingly wonderful guys and our fathers hit the jackpot too.

Growing up I always knew that if my parents were unavailable or if I had a problem, I could always turn to yours.

Your mom was the first to offer to give me a bridal shower and I still have a few recipe cards in my file that she gave me before I was married. My favorites are her strawberry cake and Italian Cream cake!
I can’t pass by your parent’s house on Golfing Green without thinking of all the fun we had over the years. I loved the Guild family picnics and Easter egg hunts because I knew your family would be there.

Once, when I was 16 and had a new driver’s license, I drove down Rawhide from Josey lane to Longmeade laying on my horn the whole way. Little did I know that our parents were standing outside your parent’s house visiting. When mom got home, she reported that your mom said, “I wonder who that nut is?” and mom said, “I believe it’s my daughter.” Humiliating, to have your parents see me in such a dumb moment!
My dad and I watched your father’s funeral on tv together. I especially enjoyed your remembrances of your father and I so wanted to be able to do that for mine. I wasn’t able to do it so I am so grateful for your sharing your memory of our father’s exchange.

I just saw your sweet note. I read it to my wife, Mary, and I could hardly get through it as the tears rolled down my face. We are truly blessed to have had such wonderful loving parents and to have our parents be such wonderful friends. God bless you, Susan!