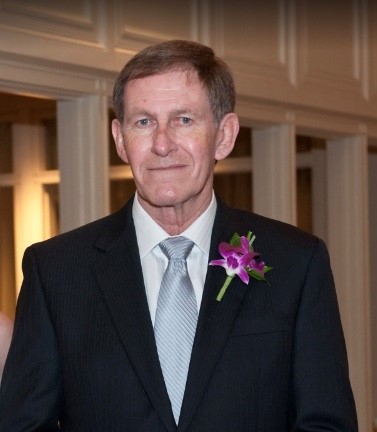 Bill is survived by his wife of 52 years, Gwen May, sons Dennis May, Alan May, and Todd May, and daughter, Sharon Montgomery, as well as his sister, Nancy Bryant and brother, Tom May, and extended family.

Bill was born on April 14, 1945, in Lake Charles, Louisiana to the late Agnes and George May and later moved to Lafayette, Louisiana where he graduated from Lafayette High School in 1963 and began his college education at the University of Louisiana Lafayette. He later transferred to Louisiana State University where he graduated with a degree in Accounting in 1967. Bill then served honorably in the US Army in Vietnam from 1968 to 1970.   Early into his career after to moving to north Texas, Bill elected to start a CPA practice, and several years later brought his brother and sister into the business and they formed May & Bryant.  Bill continued to work as a CPA and financial advisor until right before his death.

Bill was a strong, kind, loving, and supportive father. He was his family’s largest supporter in any activity that they were involved in. Bill was very generous with his time, where he could be found volunteering to coach in various basketball leagues and served for years as a nursery teacher at First Baptist Church in Carrollton, TX.  Bill also had a love for LSU athletics and enjoyed taking family vacations with Maui, Hawaii as his favorite destination.

A memorial service to celebrate his life will be held on Tuesday, May 17th at 10:30am at North Dallas Funeral Home located at 2710 Valley View Lane, Dallas, Texas 75234.

In lieu of flowers, the family is suggesting donations in support of ALS research.

One Thought on George ” Bill” May

It was with sadness that I learned last week of Billy’s death. We were very close friends throughout high school, were best man at each other’s weddings and remained in touch over the years. My condolences to Nancy and Tommy, and to Billy’s family.