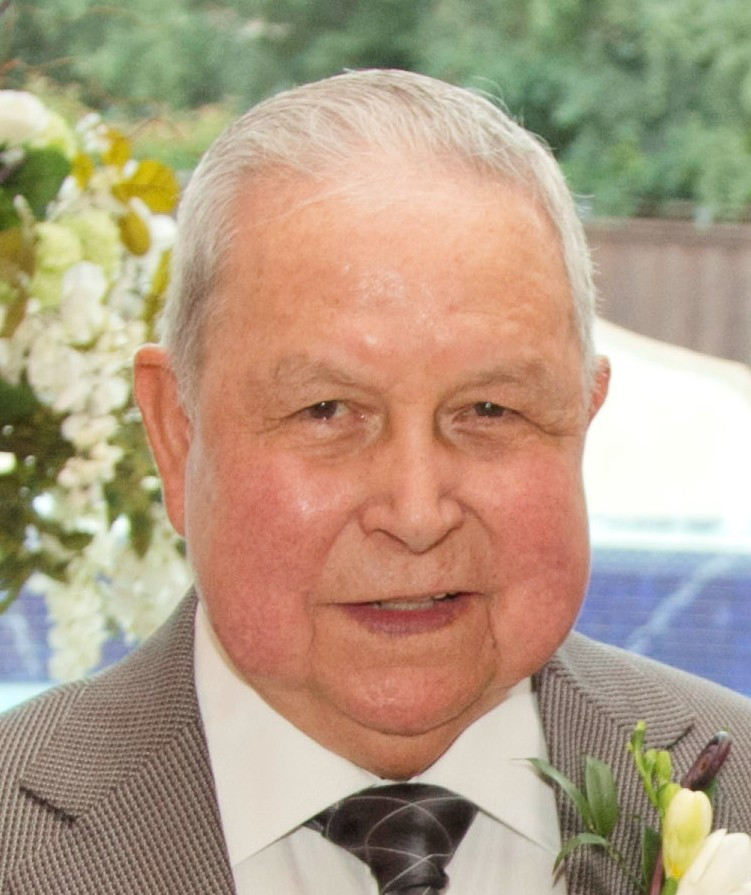 Fred Montoya entered the gates of Heaven on September 10, 2022. We are saddened by this tragic loss, but we are uplifted knowing our beloved Father, Grandfather and Great-Grandfather is with the angels and saints in Heaven. He is now reunited with those we lost before him, including his beloved Rosa. Just two days before he passed, he and “Mamacita” would have celebrated their 71st wedding anniversary. His 98 years on earth were filled with family, faith, love and happiness.

Fred was born on October 7, 1923, to Teresa and Antonio Montoya in Dawson, NM, a coal- mining “company town” in northern New Mexico. His father began working as a coal miner at the age of 13, and his parents taught him the value of hard work, grit, and determination.  Although his parents had little formal education, they worked tirelessly for their four children.

After graduating from high school (the first in his family to do so), Fred served in WWII in the Army infantry. Upon his return, Fred took advantage of the GI Bill and graduated from the University of New Mexico as a civil engineer. His first job as an engineer was with the U.S. Geological Survey, and his first assignment took him to Tucumcari, NM, as a hydraulic engineer. Most importantly, he met Rosa, the love of his life, and it was love at first sight. Just six months after they first met, they married on September 8, 1951.

Fred and Rosa lived in Tucumcari for the first four years of their marriage, but then Fred was recruited by the U.S. Army Corps of Engineers. His new position took them and their two young children, Regina and Robert, to Albuquerque, NM. Within the next three years, their family grew with the addition of two more sons, Victor and Andrew.

In 1971, Fred and Rosa moved with their four children to Dallas. They were active with the Catholic Church, and Fred became a member of the Knights of Columbus. He was totally devoted to his family as well, and he encouraged all his children to dream big, audacious dreams. His children knew he would always be there for them, and that he would support them any way he could. Since he was an engineer and a math whiz, he made sure every high school math problem was done correctly.

Fred was an amazing supporter of his incredible wife. When Rosa was a teacher at Thomas Jefferson HS, she became the Spanish Club sponsor. During many Dallas Cowboys home games at the old Stadium in Irving, they helped the students sell hot dogs and other refreshments in a nonprofit kiosk to raise money for field trips.  One year the Spanish Club students raised enough funds for all of them to attend a conference in San Antonio, the first time many of them had traveled outside the DFW area.

Fred remained with the U.S. Army Corps of Engineers until 1985, when he retired. The following year also brought another change to his life: he became a grandfather. He helped his daughter, Regina, achieve her professional aspirations by being the “day caregiver” for his first grandchild, Jessica. He took Jessica to school, doctor appointments, the State Fair and everywhere else in between. Many kids from Lakewood Elementary and Hockaday fondly remember Grandpa Fred from their carpools.

Fred and Rosa would have four more grandchildren, Heather, Aaron, Stephen, and Ryan. They hosted many events at their home for the whole family, which grew to include two great-grandchildren, Jett and Zane. On Christmas, Rosa made her famous ribs and tortillas, while Grandpa oversaw the distribution of presents. Family meant everything to Fred.

When Rosa’s health declined, Fred never left her side. He slept many nights in a hospital bed, so that she would not be alone. Now, at the age of 98, he is reunited with Rosa in Heaven.

Fred is survived by four children and their spouses and loved ones, Regina Montoya and Paul Coggins; Dr. Robert and Debbie Montoya; Victor and Deborah Montoya; and Andrew Montoya and his dear and special companion, Sharon Dillon; five grandchildren, Jessica Montoya Coggins; Aaron Montoya; Ryan Montoya and his fiancée, Valeria Santoyo Serrano; Heather Anderson and her husband, Phillip; and Stephen Montoya; and two great-grandchildren, Jett Jaykus and Zane Anderson. He is also survived by many nieces, nephews, grandnieces, and grandnephews.

Fred is preceded in passing by his parents, Teresa and Antonio Montoya; his brother, Albert “Veto” Montoya (Mary); his sisters, Estela Esquibel (Caskie) and Refugia “Ruth” Trujillo (Nick); his sisters-in law, Hortensia Ortega (Tony) and Ester Madrid (Joseph); and his brothers-in-law, Juan (Paulita) and Enrique (Teresa). He is also preceded in death by Peter Anthony Montoya, his infant son.

In lieu of flowers, please consider a contribution in memory of Rosa and Fred Montoya to either the Dallas Education Foundation (DISD) at www.dallasedfound.org/donate or 9400 N. Central Expressway, Dallas, TX 75231 (Attn: Mita Havlick), or to All Saints Catholic Church Scholarship Fund, 5231 Meadowcreek Dr., Dallas, TX 75248.

Gina, Robert, Victor, Andy and all of the family,
We are very sad at the passing of Uncle Fred. You have our deepest condolences and sympathy during this difficult time. Our thoughts and prayers are with you all.
Love,
Diana Meraz and Roberto Ramos

Mr. Montoya will never know the impact he had on my life. It is my prayer that he is reunited with his beloved wife and she is with her “Freddie”. RIP “Grandpa”. Your legacy will never fade.