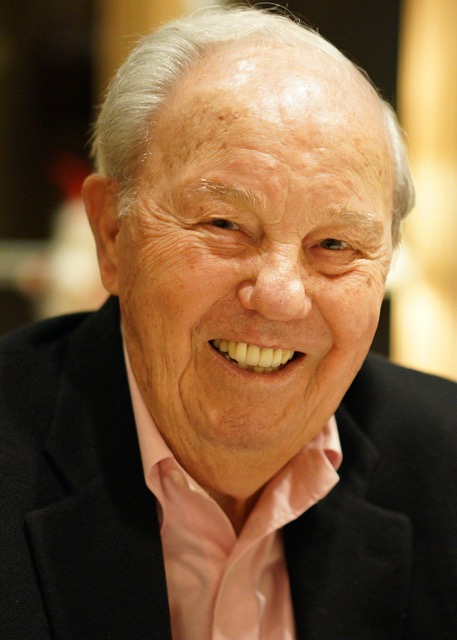 Creed Lamar Ford, Jr. passed away peacefully on Thursday morning, September 2, 2021. Creed was born on January 26, 1926 in Houston, Texas to parents, Lydia Capdeville and Creed L. Ford. Upon graduation from Jeff Davis High School, Creed Jr proudly served our country in World War II as an Aviation Cadet in the Army Air Corp. After the war, he traded his Army uniform for an Aggie uniform and marched to the orders of the Fightin’ Texas Aggie Band. He graduated from his beloved alma-mater in 1949. Gig ‘Em! The following year, he married his college-sweetheart, Jane Freitag and began what would become a lucrative career in the Life Insurance Industry. From Hartford to Philadelphia, Creed and Jane eventually found their way back to Home-sweet-home, Dallas, Texas where they raised their five children.

As a lifelong Catholic, Creed understood the importance of serving others and always had a strong sense of community. He and Jane pioneered the Lake Highlands area and were founding members of St. Patrick’s Catholic Church. He graduated from Boy Scout to Scout Master, which inspired him to become the Founder and Director of the YMCA Camp Grady Spruce Golf Classic. The 28 year tradition continues its mission today by supporting and sending hundreds of boys and girls to a Christian Summer Camp, who otherwise couldn’t attend.

In 2015 Creed became the first resident at the newly built Traditions Senior Living, where he soon met the second love of his life, Sande Wilkinson. Shortly after they were married. They were very active and shared many close friendships at the Traditions.

Creed is preceded in death by Jane, his wife of sixty-five years as well as his son, Creed Lamar Ford III and his brother, Gene L. Ford.

Creed is survived by his wife of four years, Sandra Wilkinson Ford.

A Funeral Mass will be held for Creed 11am, Wednesday September 15 at St. Thomas Aquinas Catholic Church. Interment to follow at 1:15pm , Dallas-Ft. Worth National Cemetery.

In lieu of flowers he requested that donations made to the YMCA Camp Grady Spruce Golf Classic.

Linda and I send our love to the entire family. Creed was a giant in my life; a profound influence. Peace be with you.

Thoughts and prayers to the Ford family. What an awesome example of what it means to be a true gentleman.

I have great memories of visiting Aunt Jane and Uncle Creed and my cousins in Dallas. My condolences to his wife and all the family.

Christie and John Davis
10:41am

We all lost a great man.

With fond memories of your mother and father from our time at St. Patricks. to he whole family, my condolences.

My father, Jack Bishop,will be happy to be reunited with his golfing buddy! Our deepest condolences. Michele and Jeff Smith

Bill And Katy Barringer
10:41am

Creed or Chief as I called him was one of the good guys. He had an tremendous impact on my life as he did for so many. Life gives you just so many great people in your life Creed was that special person in my life. Heaven got one great soldier What a great reunion with Jane and C3. You will be missed my friend but never never never forgotten

Beautiful memories with this one of a kinnd but loveable guy. He guided me on such wonderful trips throughout our lives. A wondeerful Christian man and a true friend.

Creed was a fine man and a great profesional. It was my pleasure to work with him over many years

Creed’s character, charm, enthusiasm, compassion, and work ethics is just a few of the many attributes I think of when remembering this beautiful man. I will miss him greatly.

We have treasured memories of spending Thanksgiving with the Ford family when they lived on Robin Hill. We were new to Dallas, and they included us in their holiday gathering. Creed, Jane and Creed3 were very special to us.

What a great man Creed was, his MANY friends in Hideaway, Tx and Lindale ISD will always remember him fondly! God Bless the Ford family. Gig Em, Creed!

Our Love and prayers to All of the Ford Family

Love &Prayers for All of the Ford Family