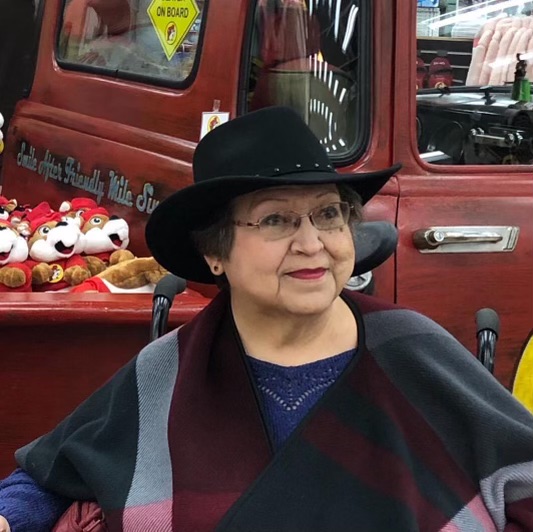 Christina Salinas Hollis was born January 15th, 1947, and died February 10th, 2022.  She was born in Reynosa, Mexico to Mercedes Garza and Edin Salinas.  She contracted Polio as a child.  After her mother’s passing she, her older sister Baudilia and younger brother Charlie, moved to McAllen, Texas where they were raised by their stepmother Clara Gonzalez Salinas and father.  Christina grew up in McAllen with her siblings including her half-brother Edin Salinas Jr. She graduated from McAllen High School in 1969 with her brothers Charlie and Edin.  She later moved to Irving with her sister, Baudilia, and brother-in-law, Pablo Gonzalez, and then moved to Dallas where she helped raise her niece, Elizabeth.  Christina also worked at Good Year as key punch operator and made many friends.

Christina loved all things country and moved to east Texas where she was part of a country band.  She was married and had a farm in Mineola, Texas.  She became pregnant and was told by her doctor that she could not carry her baby to term and that she should have an abortion, but she sought another opinion and was blessed with the birth of her daughter, Rhonda Hollis.  Rhonda was the joy of her life and though Christina was in a wheelchair, she was a strong woman and cared and gave her daughter all the love that a mother could give.  They enjoyed raising corn, peas, potatoes, squash and melons, and Rhonda enjoyed driving a three-wheeler around the farm.  Christina had a special place in her heart for all kinds of animals, and she loved and cared for many pigeons on the farm.   Throughout her life she also had several dogs, cats and birds.

After Christina divorced, she and Rhonda moved to Arlington. Christina enjoyed making hand crafted items and had craft booths that she would stock with her gnomes, signs, dream catchers and pillows.  She enjoyed making people smile with her crafts.  Christina was a kindhearted soul. She always had a smile to light up the room.  She made many friends in Arlington including one of her dearest friends, Olivia.

She moved to north Dallas and the Garland area to be close to family and to help raise her nephews Pablo and Tomas Rubealcaba.  The boys enjoyed getting to ride in her arms or on her wheelchair pedals.  Christina moved to a senior living community and made many friends.  She often helped in the community by helping translate or just by being a good listener, and in turn her friends at the community where there when Christina needed help.

Her daughter Rhonda bought a home in Rowlett and moved her mother in. Christina was overjoyed to be with her daughter and to have a home where her two Chiweenies, Julie and Dorothy, could run free in a big backyard.  She had Rhonda put a bird feeder and a bird bath for the birds.  Christina was not able to drive, but she did work through her computer to share photos of lost pets or pets that needed a home.  Up to the days when she was sick, she was working on her crafts and connecting with some of her dearest friends across the US and overseas.

Christina loved her family and friends and is survived by her daughter Rhonda Hollis, niece Elizabeth Rubealcaba, her husband Robert Rubealcaba, and their sons Pablo and Tomas Rubealcaba, brother-in-law Pablo Gonzalez, brother Edin Salinas Jr and his wife Bertha, and Christina’s other brother Charlie Salinas.  Her sister-in-law Maria Salinas, and many nieces and nephews.  She was preceded in death by her mother Mercedes Garza, and father Edin Salinas, stepmother Clara Salinas, sister Baudilia Gonzalez and her nephew Edin Salinas III.

Services for Christina will be on March 19th starting at 11 am at St. Paul the Apostle Church in Richardson.  Rosary will begin at 11am followed by Mass at 11:30am. Eulogies and Lunch will begin at 12:30pm at Parish Center.  Graveside service will be at 3pm at Restland in front of the mausoleum that has its back to Greenville Ave.

You will be missed Christina. Your childhood friend. Yolanda Ortega. And also your friend Estella Contreras. Fly high my friend. Rip

I’m sorry for your loss and I will keep you in my prayers as you know you can call me any time day or nighttime you are like a daughter to me . We way miss her but now she is in God hands and resting in peace and from heaven she always going to watch over you , and she always will be alive in our heart and our memories.

Rhonda, you became an incredible
daughter just like your mom. She was a good friend. We met at work in Dallas. And yes she loved animals all kind of animals. She didn’t let life stop her from doing the things that she loved.She is now in heaven feeling no pain, and
walking and dancing and feeling so graceful.
May the Grace of God be upon you and your. loving family.

I met Christina when I was in my late twenties when she lived in Arlington. We didn’t see each other as much as we wanted to but we talked on the phone and we’d meet each other at the Country Peddler when it came to town. She had so much talent in making her beautiful crafts and having people buy her items was a real business for her. Every time I’d call she was always working on something even if it was late at night. I will miss my dear friend, our late night talks when I could not sleep she was the last person I’d call at night. She was a real friend throughout all these years and will never be forgotten for as long as I live. She loved Rhonda so very much and was very proud of her. Elizabeth was her Angel in disguise always being there for her. My condolences to all of the family.

Even though we lived miles and miles from each other, we talked to each other on the phone a lot. I met Chris when we both had booths at Cooper Street Craft Mall. I marveled at all she was able to do being in a wheel chair, she did beautiful work, soooo talented! Her spirit and positive outlook on life was amazing!!
Rhonda was her pride and joy and loved and enjoyed her entire family! I will always miss my friend.

Thank you so much.

Thank you love you too.

Thank you so much for sharing.

Thank you Caryl she felt the same.