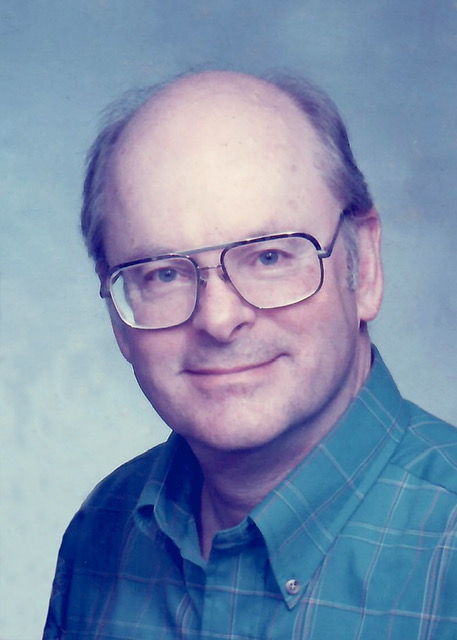 Charles Joseph Brandt of Farmers Branch, Texas passed away Tuesday February 8th, 2022, at the age of 95.

He was lovingly cared for during the COVID-19 pandemic in the home of his daughter Bev and son-
in-law John Grimley.

He was born on July 26, 1926, in Muskogee Oklahoma to Bernard Franklin Brandt and Jeanette Ross
Brandt. He grew up during the depression. After being drafted into the US Army he followed General
Patton’s tanks through Europe. He was enroute to take part in the invasion of Japan when the first
atomic bomb was dropped on Hiroshima. By the time his ship arrived in port, Japan had surrendered,
and he and his fellow soldiers became part of its occupation.
After the war ended, he returned home to work in the family-owned grocery store in Tulsa, Oklahoma.
In Dallas Texas he found a career in the early days of computers and later built his own successful
business.
He met Phyllis Bryce on a blind date, and they married in 1949. Their marriage of 68 years was a
beautiful witness of love to all who knew them. They raised ten children together. They were founding
members of Mary Immaculate Catholic Church. Charley was a humble, quiet, gentle man with a strong
faith in God and a wry sense of humor. He exhibited heroic virtue throughout his life especially during
the six-year period he served as primary caregiver to his beloved wife Phyllis.
He is preceded in death by his parents, brothers Bernard Brandt and Owen Morris Brandt, his wife
Phyllis Bryce Brandt and his daughter Patricia Jeanette Fernandez. He is survived by his sister Mary
Anne Reed, his children Mary Beth Barron and husband Kirk, son-in-law Richard Fernandez, C.J. Brandt
Jr. and wife Martha, Jeanne Yargicoglu and husband Atalay, Thomas Brandt and wife Mary, Elaine Teves
and husband Chris, Bev Grimley and husband John, Edward Brandt and wife Gloria, Rita Ford and
husband Scott, Laura Nelson and husband Jay, 32 grandchildren, 15 great grandchildren and many
nieces and nephews. 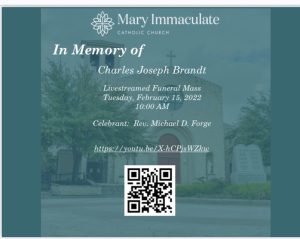 I have never met such a quiet, gentle and loving man such as Charlie! He & his wife, Phyllis, quickly became my husband, Tony’s, and mine best friends when we moved across the street from them in 1961. I remember when Phyllis was in hospital giving birth to son Ed, I asked Charlie if he needed help. With a child in each arm & lots of commotion in the house, he quietly & calmly said:”no thanks, all is under control!” What a man!! The world was a better place with Charlie & Phyllis in it—-especially mine!!
RIP my friend & give Phyllis and Tony hugs for me!!

My deepest condolences to the Brandt family. Rest in peace Mr. Charles J. Brandt. May the good Lord guide the
the family in mind, spirit and heart to ease them from pain. In Jesus name Amen.

Dear Brandt Family, We were all sad to hear that Mr. Brandt had passed. Dad told me that, “Charlie was the first person he met at Mary Immaculate, the nicest guy he ever knew.”
I have many fond memories of times spent at your house – your dad always welcoming and making me laugh. He was truly a wonderful example of The Greatest Generation. I hope he and your mom are having a beautiful Valentine’s Day in heaven.

The Fournier family will be saying the rosary together tonight at 5:30 from home and watching the funeral mass on livestream. We are being very careful because dad is immunosuppressed from medication he takes. In fact, his doctor at UTSW gave him a second Covid booster this morning.

Our thoughts and prayers are with you.
Love, Susan and Tad, Betty and Brian, and Gerald Fournier