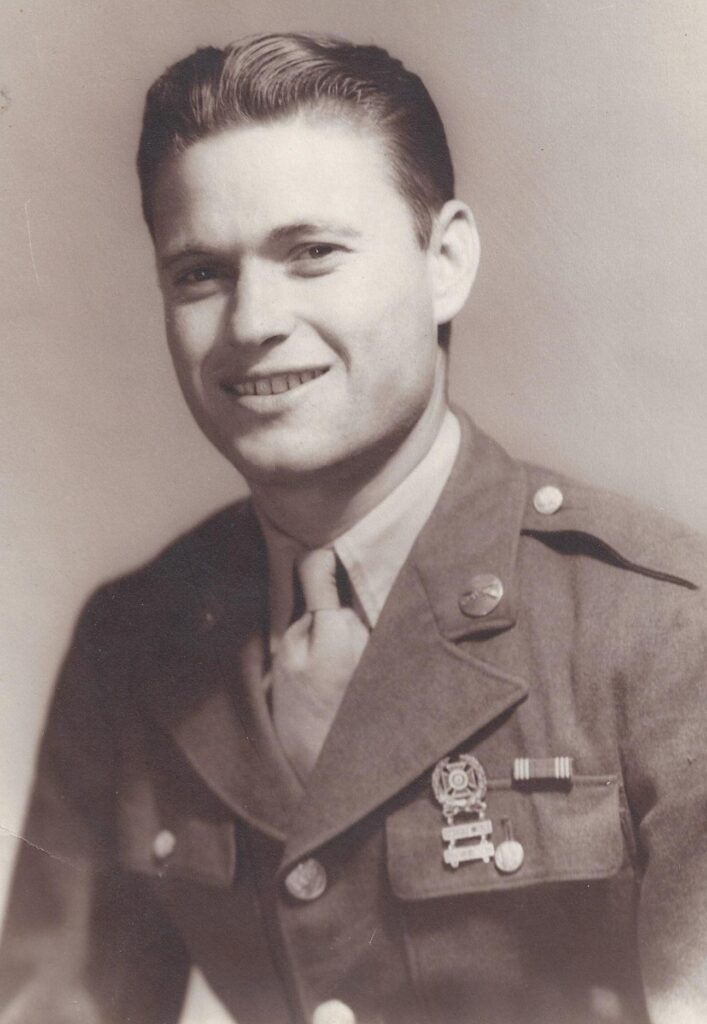 Born in Dallas, Texas to Joe and Lottie Godwin.  One of 11 children.  Preceded in death by his parents, wife, Judy; daughter, Norma Humphreys; grandson, Jeremy Wells; granddaughter, Jenny Swafford; one brother, Marlin; and 4 sisters, Fannie, Edna, Dottie and Edith.  He married the love of his life, Judy, on January 5, 1944.  They would have celebrated their 70th wedding anniversary this year.  He served in the U.S. Army during WWII as a tank gunner.  He was in the invasion of Normandy and the Battle of the Bulge.  He was decorated with a Bronze Star, Purple Heart and the European African Middle Eastern Campaign Medal with 5 named battle stars.  He served under General George S. Patton and his unit received a Bronze Star for destroying 13 tanks in the battle of Arracourt.  He worked his whole life as a cabinet maker.  He enjoyed playing 42 with family, but his passion was going to the horse races with his brother James.  He loved to play his French harp and always loved to complain about the Dallas Cowboys.  He is survived by his 4 loving daughters, Ruth Wells (Burton), Carolyn Swafford (Jim), Johnnie Ryan (Bob) and Paula Muth (Foster); grandchildren, John Wells, Kim McMellon, Jamie Swafford, Jeff Wells, Jennifer Faircloth, Janna Harris, Robbie Ryan, Chuck Muth, Lisa Dempsey, Tracie Teel and Elizabeth Muth; 18 great-grand children; 2 great-great-grand children and 5 brothers.  Pallbearers are his grandsons, John, Jamie, Jeff, Robbie, Chuck, Jack, Ryan, Colton, Trent, Chandler, Corey and Tyler.

Brother Jeff Roe will be officiating the funeral service.

I remember writing you a letter as a child telling you how happy I was to have you as my Grandpa. The truth of those words as a child never changed. While I am deeply saddened of your passing I am extremely grateful for the home you provided for your family to grow up in. I cherish the memories of childhood growing up with my cousins in your home. Thank you for providing such a wonderful example of how family should be. Until we meet with you and Mamaw in Heaven~

My thoughts & prayers are with the family at this time.

To the Godwin family, Sorry for your loss!!
Our hearts go out to you in your time of sorrow, may peace which comes from memories of love shared; Comfort you all now and in the days ahead! ~Rest in peace Henry~

Uncle Henry and Aunt Judy,I cannot think of one without the other..We will all miss them both,we can take comfort knowing they are together again.Your niece,Cheryl

Uncle Henry,Aunt Judy,I cannot think of one without the other.At least we can all take comfort in knowing they are together again.Your niece,Cheryl

I can think of the words that would explain the sadness I feel for passing of Henry and Mrs Godwin. I work for Henry on and off for 30 years. Henry was like my second Dad. In the past 3 years Henry and I have talked About work And our visits to the VA hospital in Dallas. I’ll miss you Henry.

Many condolences to the Godwin Family. Mr Godwin was a great person. One of my best customers. He will truly be missed.