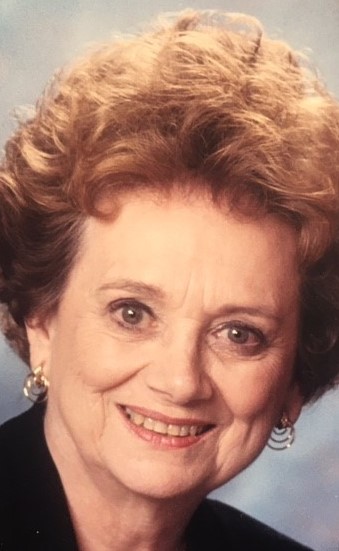 Myrtle Mae Watkins, 93, peacefully passed away on October 14, 2021, at her home in Carrollton, Texas, surrounded by her loving family. She was the widow of Doyle Watkins with whom she shared many happy years.

The last of five children, Myrtle was born in Beaumont, Texas, to Alfred and Elavye duPerier. In addition, to her loving parents, she was preceded in death by Anna Marie (Sissy), Alfred (Sonny), Dorothy and her closest brother and sibling, Reagan, whom she was 13 years the younger.

When Myrtle was four years old, she nearly died. Her doctor made house calls and she often reminisced about their tea parties. To build strength, she was introduced to dancing, which became a life’s love, spending many hours at Ms. Judith’s dance studio. Excelling in dance, she began teaching dance while still a student at Beaumont High.

Myrtle went on to college at St. Mary’s, Notre Dame, Indiana. Influenced by Sissy who was a scholar and teacher of history, she studied to become a teacher specializing in English. She became a talented writer and enjoyed journalism and poetry. After two years, she moved back closer to home and studied at The University of Texas in Austin. There she wrote for the campus paper, The Daily Texan, the most award-winning daily college newspaper in the United States. She continued her love of dance by directing The Texanns, a competitive dance company. After college, Myrtle was offered a dance position with the famous Palmer House in Chicago. Her life changed forever when teaching won over dancing, and she returned to Beaumont. Later moving to Dallas, she was the greatest mother on earth to Sara, Joe, Tom, Helen, and Dorothy. Without question, her unconditional love for her children was the reason they were given life.

Myrtle’s life was an example of deep, convicted faith, perpetual hope, and undying sacrificial love of family, friends, and countless others fortunate to experience her virtuous character and inevitable nurturing. Dancing and teaching, her work ethic centered on her children with her salary used for their education and support. In the early seventies, with the help of Doyle, family, and friends, she was able to overcome some difficult times and grow even stronger in her role as the cornerstone and matriarch of her family. She never lost her faith, her love for all, and her selfless giving as a mother.

She was hired in 1970 by Newman Smith, her former Beaumont High principal, to teach English at R. L. Turner in Carrollton. She also sponsored the yearbook and directed the drill team. She was influential in the State of Texas recognizing dance as a qualified class for satisfying the gym requirement. She retired after 18 years. After retirement, Myrtle moved on to teach and consult with college students at Collin County Community College in Plano. She was responsible for founding The Writing Center where students can go to get one-on-one assistance. In 2007, the North Texas Writing Association honored her with their Outstanding Tutor award. She truly loved her work until she retired for good at age 82.

Myrtle enjoyed her associations with the Farmer’s Branch Women’s Club, The Delta Kappa Gamma Society International, and the Texas State Teachers Association/National Education Association. She and Doyle shared 35 years of marital bliss until his death in 2011. He was her lifelong cohort in the Texas Exes and was such a fan that he had longhorns hanging on the wall, “The Eyes of Texas” as music for the doorbell, and a Texas Tower side table lamp. During football season, there was a friendly rivalry between the Longhorns and the Aggies in the family.

Again, she cherished her faith and never missed a Sunday Mass or a daily Rosary. Her Dallas area parishes included the communities of St. Pius X, St. Rita, Mary Immaculate, and St. Catherine of Siena.

In the words of St. Francis of Assisi, “In dying, she has been born to eternal life” with Christ and we await seeing her again.

She is survived by:

The family would like to thank Val Richards, Cathy Adams, Kathleen Welsh, Keishia Colbert, Madeleine Truong, and numerous others for their loving care and support throughout the years.

What I will miss most is her sweet, brilliant smile when she would greet me. No words were needed. So privileged to know and love her!

I have had the privilege to be Myrtle’s hospice nurse for the past few months. Myrtle was a beautiful soul, funny, feisty and a little bit of a prankster. Her mothering skills are quite evident in the love and support from her children. A most amazing family, that loves and cares for each other. Myrtle the turtle I’m going to miss taking care of you! Always had a smile for me, and definitely has left an imprint upon my heart. She loved everybody.

A loving friendship lasting over the decades. She is sorely missed-her spirit lives on in her faimily!

My favorite Teacher! I always loved seeing her at Joey’s baseball games. I would always make a point to say hello. It is a rare person who can make you want to go to class!

So many happy memories fill my mind, good times rearing our families. Myrt’s happy disposition was a gift for all. Hers was a life well lived. Am very grateful for her friendship. Sending love to all the family. You were Myrt’s pride and joy!

I was blessed to know Myrtle, first when we taught at Turner together, and then over the years in Delta Kappa Gamma. She was a warm, gracious, and loving lady in every way. May God give her family peace and delight in wonderful memories .

Such a beautiful sole. A wonderful family who we shared many hours with. She will be missed.

There is no single word to describe how wonderful and lovable person was Mrs. Watkins. The beautiful trait of her soul is the sweet smiling face.
Today November 2, 2021 is All Souls Day, I pray at mass for you because I still hold your love in my heart, and to commend your soul to God’s tender mercy and compassion.
Keep smiling on me, Mrs. Watkins, you do know that your sweet smile brightens my day.

The love that my Daddy and Myrt shared was beyond adorable. And she was an amazing, caring caretaker of him during his last time on this earth. I could not have asked for a sweeter stepmother.
Thank you, Myrt.❤️