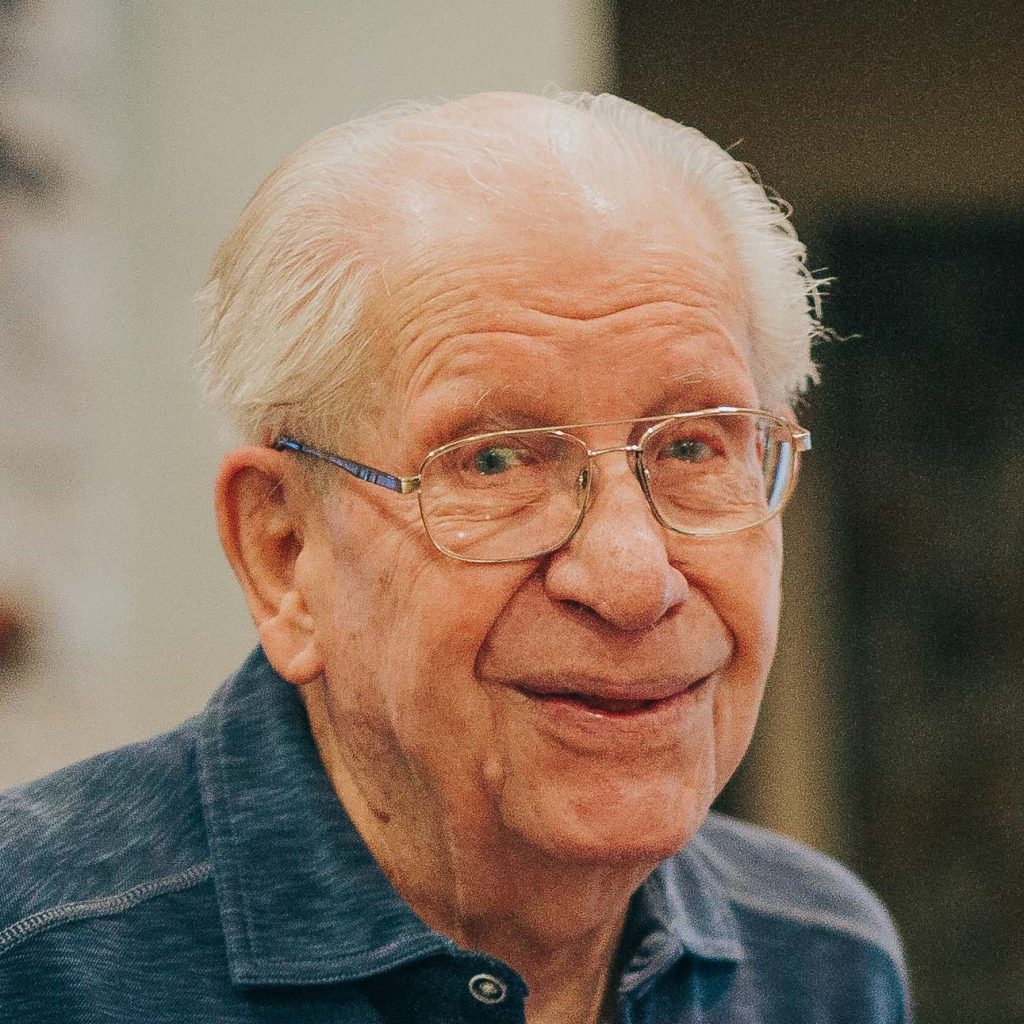 Bob grew up in Hartington, Nebraska with parents Edward and Katherine Hesse and siblings Agnes, Edward, Eugene, James, and Dorothy. He graduated from the University of Nebraska and the University of Nebraska law school. He worked 37 years as a landman for Kansas Nebraska Natural Gas Company (now Kinder Morgan) living in Chappell, Nebraska, Sterling Colorado, Gering, Nebraska and Longview, Texas.  He retired in 1987 at the age of 62.  Bob and Marilyn moved to Dallas in March 2019 to be closer to family.

Bob loved all sports and was a die-hard Nebraska Cornhusker fan and a Texas Rangers fan.  He took up long distance running in his 50’s and had a wall of trophies for the 10K runs he won in East Texas.  He ran a marathon in his 60’s.

He was a great story and joke teller and expert speller, competing in Nebraska County and State spelling bees as a child and tutoring his children as they competed.  He was wicked smart and never hesitated to correct anyone regardless of who was right.

His greatest love was his family however.  He was a faithful spouse, frequently stating that the best decision of his life was marrying Marilyn.  He loved attending sporting events for his children and grandchildren and for the teams his sons coached. He was our cheerleader, comforter, encourager and beloved husband, father, grandpa, great grandpa and great-great grandpa.

The family would like to thank his personal caretaker over the past few months, Cherry Smith.

Donations in Bob’s memory may be made to the charity of your choice.

I’m so sorry, Marilyn, for the loss of Bob. He’s at peace, now I send prayers that you can feel some peace too.

My admiration, love,and hugs to you, your mother and family. God blessed you with this wonderful man… RIP Bob Hesse..

Dear Mrs. Hesse,
I wish to extend our sincere condolences due to the passing of your husband Bob.
His picture on Linda’s Fb page looks terrific. The only thing missing is a baseball hat.
Had I known you were living in Dallas, I would’ve loved to stop by for a visit in 2019. Janet met there during our studies at Dallas Theological Seminary and come through to see friends whenever we’re in the US.
My prayers are with you during this time mixed with sorrow from Bob’s absence and joy from fond memories your shared.
I loved living in Bellevue as a kid. Your property served as our sports complex. We played hours of football and whiffle ball in the front yard, basketball in the driveway and even in the garage when the snow was too deep! 🙂
Neither you nor Bob minded all the congestion…
Thank you for being such fantastic neighbors.
I greatly appreciated Bob’s role in G.O. baseball and your commitment to the snack bar. Memories still race through my mind of trying to out run the rest of my teammates to the counter after games, once our coach dismissed us with a specific amount we could put on his “tab”. Usually 30 cents could by a long Bubs-Daddy and a can of pop…
You and Bob modeled great teamwork. Thanks for loving your kids, others kids and sports so well 🙂
Sincerely,
Fred Young
35, Crestview Drive
Gering, NE 69341 😉

I had only a few opportunities to visit with him over the years, but was always impressed at his quick wit and love of family. I am confident that the strong family he loved will be a great support to one another. He and you are in my prayers.