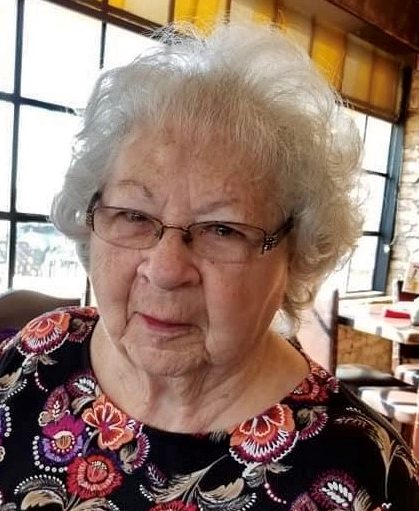 Pauline Dolores McGuyrt Schmidt Thomason was born in Canton, Ohio on November 9, 1928.  She was the third child and the first daughter of John William McGuyrt and Alice Harris McGuyrt. She adored her much older brothers, Malloy and Johnny, who called her “Sister”.

​Dolores graduated from McKinley High School and attended one year of nursing school.  She then went to work at Timken Roller Bearing Company, but in the decades that followed, she worked for doctors and hospitals, retiring from Children’s Hospital in Dallas in 1993.

​She was married to Floyd Schmidt, father of her daughters, Cindy and Sherri, for over 25 years and at the age of 87, she married C.D. Thomason. They were married about 2 ½ years until his passing.

​A long-time member of Irving Baptist Fellowship, she passed away on August 26, 2021. She is predeceased by her parents, brothers and daughter, Sherri Ann.

Cindy, Heather, Amber and Ashley, I can’t tell you how sorry I am about the loss of aunt Dolores. May he rest in peace and I hope you know that I will be keeping you all in my thoughts and prayers. I love all of you <3

Delores was a lovely lady and will be missed. She deeply loved her children granddaughters and great grandchildren. May all be find comfort and peace.

Your smiling face yourloving eyes, and warm brace. To the family we are truly sorry for y’all loss, God bless may He comfort you all.