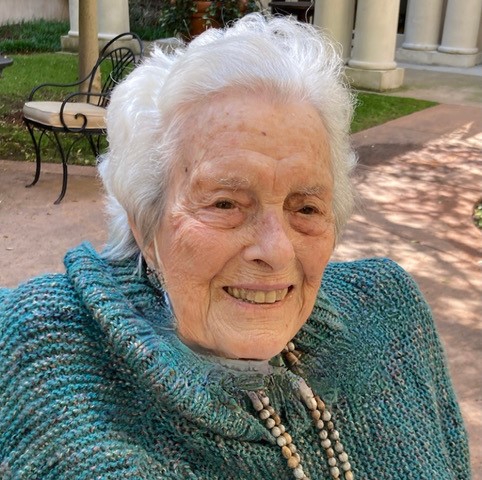 Glendora Rollins Trescher (Dodie) passed away on Mother’s Day, Sunday, May 9, 2021., in Dallas, TX.   She was 101 years old, a woman of remarkable spirit, love, joy, inquisitiveness and generosity.   It was fitting that her last day with us was Mother’s Day, as she was mother to not only her two daughters and their friends, but also to world-wide friends made on travels, to her family of helpers at Edgemere, to an array of cousins, nieces and nephews.

Dodie was born August 6, 1919 in Des Moines, Iowa, to Harry Tebbetts Rollins and Glendora McCord Rollins.  She was the third of four children, with a little sister following in her wake, and a beloved dog, Bumford, trotting happily along.   A child of the Depression, she learned to throw nothing away – paper only used on one side, aluminum foil—and to gather family, friends and former strangers into her circle of storytellers, laughter, blooming flowers and the ever-present Love of God.

A graduate of Vassar College, Dodie met her husband, Robert L. Trescher, then a Naval Officer,  in wartime San Diego, CA as he prepared to deploy to New Guinea. They were married on their sixth date, in 1943.  After the war, they returned to Philadelphia, where her husband was a Partner at the law firm Montgomery, McCracken, Walker and Rhoads. The couple had a lifelong devotion to the University of Pennsylvania and the Penn Museum, the American Bar Association and various community organizations, not least of which was her church.

She was predeceased by her husband of 59 years.  She is survived by daughters Victoria Agnich and husband Richard of Dallas, TX, and Ellen Haas of Kirkland, WA, grandsons Robert Agnich and wife Tory, in Dallas, Michael and Kelli Agnich and their children Landry (13), Emily (11) and Gavin (5 months) in Menlo Park, CA, Jonathan and Jessica Agnich and children Elizabeth (4) and Elliiot (2) in San Francisco CA, and William Haas of Los Angeles, CA.  In addition to these official family members, there is a diaspora of “family” in China, Australia, South Korea, Philadelphia, Charleston, and Dallas.  Her longtime caregivers, Linda Coffey, Juliet Kerr, and Mariatu Kabba, have become a treasured part of her family and the loving staff at Edgemere deserve our gratitude.

The family will hold a private celebration of Dodie’s life.  Memorials may be given to the Dallas Arboretum, one of her favorite gardens of all.

One Thought on Trescher, Glendora Rollins

She will truly be missed,can’t forget that Beautiful smiling face.Such a blessing to be around.