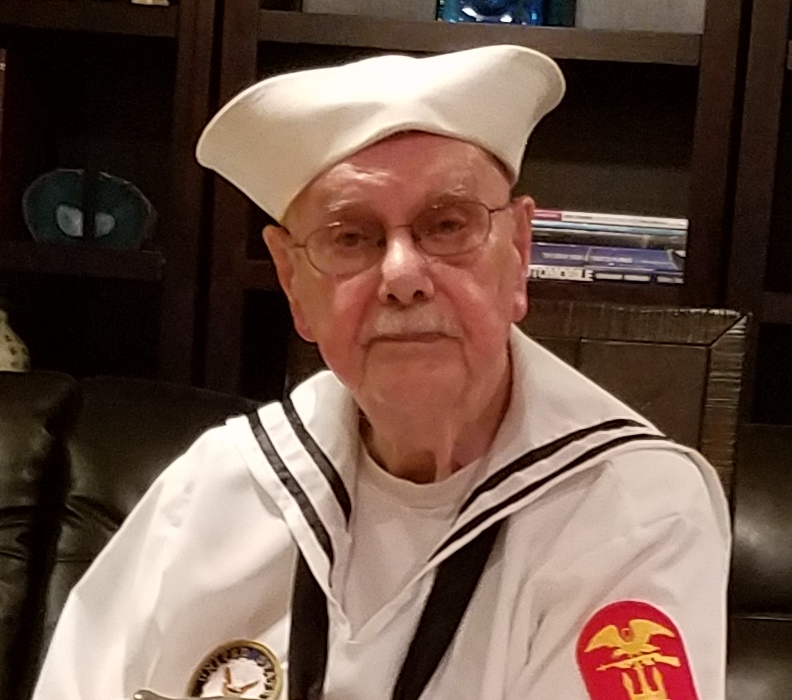 JAGERS, Robert Bernard (Bob), age 98, of Carrollton, passed away on April 1, 2021 from complications of an infection. He is preceded in death by his wife Rosina (Rose) Dell’Aquila and infant granddaughter Sarah Downs.

Bob was born in Chicago on July 22, 1922 which was the beginning of his fascination of the number 22. His hometown is where he honed his skill of sneaking into Wrigley Field to watch his favorite team play ball…the Chicago Cubs.  He was born to Henry and Mary (Newton) Jagers and lived with them until his father’s death in 1934 when his mother moved the family (with younger brother Tom) to Grand Rapids, Michigan. Bob attended Catholic schools, culminating in his pre-war attendance to Aquinas College.

The bombing of Pearl Harbor prompted Bob to join the Navy which held off his enlistment to the summer of 1942 so that he could complete his school semester.  After naval training, as a Signalman 3rd class, Bob boarded LST 351 that took him to England to join the war effort. Bob took place in 4 first-wave invasions; Sicily, Salerno, Anzio, and Normandy. He was awarded the EAME, Purple Heart, American Campaign, American Theatre, and Good Conduct Medals.

He is survived by their three children, Kathleen Downs (Bob), Beverly Foley, and Richard Jagers, two grandchildren, Tim and Jeremy Foley, and several nieces and nephews.

Bob continued his education while working for Wyandotte Chemical, first at the University of Detroit and then graduating with a Masters in Chemical Engineering from Wayne State University.

Bob began working for the Chrysler Corporation as a metallurgist, which he thoroughly enjoyed. He was an enthusiastic Boy Scout leader, church usher, softball player and coach, hockey skater, amateur photographer, sports enthusiast and world traveler.  He was a member of the Society of Automotive Engineers, the American Amphibious Forces Association, the LST-325, Happy Warriors, American Legion – Italy, and the American Society of Metallurgists.  Chrysler enhanced the family’s travels by sending them to Mexico and Argentina to live where Bob headed up the company’s testing laboratories.  In their lifetime Rose and Bob visited 47 countries, dragging their children to many of them.

In his retirement years, Bob tutored hundreds of school children in Michigan and in Texas, well into his 90’s.  He was honored several times as “volunteer of the year.”

Bob is the author of  three books and an unfinished manuscript on the anatomy of a D-day.

Service at Frontiers of Flight Museum, 6911 Lemmon Ave, Dallas, on Thur., April 8, from 4-7 PM.  Seating is limited so we ask to please RSVP to bjfoley @ aol.com  CDC guidelines in effect.

In lieu of flowers the family asks that charitable contributions be made to the Frontiers of Flight Museum, 6911 Lemmon Ave., Dallas, TX 75209 https://www.flightmuseum.com/shop/donation/  or, the Daughters of World War II, 5600 Lovers Lane, Ste 116, Dallas, TX 75209, https://www.daughtersofww2.org/dwwii/checkout/donate  in honor of ROBERT JAGERS.

PLEASE REFRAIN FROM SENDING FLOWERS. The request to send flowers listed below is a mistake. The family prefers donations be made to the above listed organizations.

Kathy, Bev, Richard and family we are so sorry for your loss and offer our sincere condolences
Your father was such a great man and we have so fond memories. I’ll have to read his LST book again. I cherish the signed copy! Love Steve and Cathy Lipple

Bob, RIP, for a great man and patriot, and ‘neighbour’ from across the Detroit River. We fondly remember joint birthday parties celebrating your and my aunt Margery’s yearly on July 22! You lived a wonderful life. Ron Stang, Amherstburg, Ontario, Canada

As a VN vet, first met Bob at Senior Center in ’13. Our lunch & phone chats discussing his military “Whales” book, industry and travel adventures (plus playing his tricky animal crossword game)were incredible! Blessed to have known this wonderful man & learned of his life. Deepest condolences to Bev, Richard & Kathy.

I was with Bob on his return to Normandy for the 70th anniversary of DDay. What a great person. He will be greatly missed.

Expressing highest appreciation for the US Naval Service of Robert Bernard Jagers for our country during some of the most challenging segments of our European Theater Operations of WWII. Prayers are going up to heaven for comfort for his family and uncountable friends in their loss. May he now rest in this his heaven deployment in heaven with his beloved Creator and Lord with his preceding loved ones. comrades and friends.
D huffman. Army veteran and DFW Honor Guard member

Rick, Bev, and Kathy, sending love and prayers during this time of loss of your Dad. I have so many wonderful memories of him over the years. Thoughts and prayers are with you all! Love, Terry and Jean

Bev,It was pure serendipity when we discovered both our fathers served as signalmen in WWII. I treasure my autographed copy of “Whales of WWII”. And the time we visited St Augustine, to go to a place your father once walked. Many are touched by some aspect of the special relationship you had with your father.. May he rest in peace after a long and rewarding life. We are thinking of you and send our deepest condolences to you, Jeremy and family. May your many memories console you in the days ahead. Cathy & Roger Hadley (ret. USN) of Florida

Dear Kathleen, Bev, Richard and Families,
On behalf of the Aquinas College community, we extend our heartfelt sympathy upon learning of your father’s death. God grace you with Gratitude and Peace as you celebrate his long life among us and his Risen Life in Christ.
Bob will be remembered by name during our Memorial Mass on August 26 in our campus Chapel.
Know of our prayerful for all of you.
Sister Mary Ann Barrett, OP (Dominican)