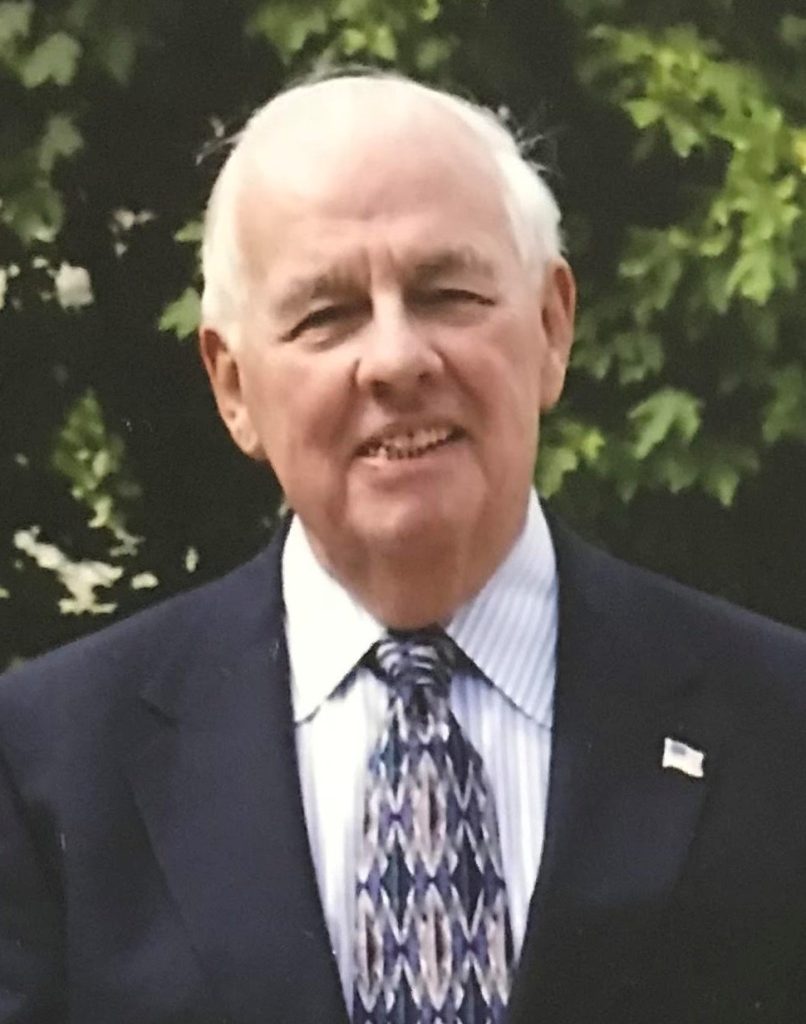 Bill was born in Washington D.C. on July 23,1930 to Bridie and William J. O’Donnell, Sr.  He graduated from Gonzaga College High School in 1948.  He was a veteran of the U.S. Navy during the Korean War, serving aboard the USS Ault.  Bill graduated from Rutgers University in 1965.  He was employed by the Western Electric Company for 35 years before retiring in 1985.

Bill and his wife Roberta (Bobbie) were married for 57 years before she passed away in October 2009.  Survivors include his four children; Debbie Steves (Peter) of Bullard, Texas; Karen Hemenway (Keith) of St. Louis, Missouri; Sharon Cantwell of Oakton, Virginia; and Dan O’Donnell of Chester, New Jersey.  Bill and Bobbie have nine grandchildren:  Allison (Travis), Caitlin, Daniel (Meagan), Bryan (Meagan), Ryan, Jeffrey (Anna Brooks), Meredith, Michael and Andrew.  Additionally, they have five great-grandchildren; William, Audrey, Aiden, Caroline and Avery.  Bill is survived by his sister, Sister Anne O’Donnell RSM of Maryland; and his brother, James O’Donnell of Delaware.  He was predeceased by his brother Buddy, and sisters Marguerite Van Gieson and Mary Beck.

Bill was a devout Catholic and active member of St. Rita Catholic Community where he served as a Eucharistic Minister, Bread Minister and member of the Intermezzo group.  He was also an active member and fund raiser for the Lake Highlands YMCA for many years.

Mass of Christian Burial will be at Holy Trinity Catholic Church in Washington, D.C. at a date to be scheduled, with interment following at Gate of Heaven Cemetery, Silver Spring, Maryland next to his wife, Bobbie.

Our thoughts are with you Debbie, Peter and your entire family.

To Bill’s family: I knew Bill through our many years with Western Electric and me through AT@T. What a wonderful man he was, full of womderful work ethic and devotion to his job. Years after our retirements, I had the honor as a Deacon to serve at St. Rita andlooked forward to seeing Bill at the 7:30am. Mass every Sunday morning. he and his “group of buddies” were always sitting together! I always admired him. may he rest in the arms of his Lord and Savior.
God b;ess you all and comfort you in your loss.
Deacon Charles Sylvester

To my O’Donnell family: you will miss him as a sibling, dad, granddad and great granddad. I’m told that as a toddler, I called him Uncle “Bull” when he came home on leave from the Navy. So, Uncle “Bull”, thank you for beach memories with the cousins; for your and Aunt Bobbie’s hospitality in VA, NJ and TX; and for sharing your version of the Mexican adventures. I know you will now raise “heaven” with that illustrious group!

When thinking of Bill a smile has to come too. He was always so gracious and happy. Truly a fine man. Condolences to all of his family. We know you will miss him.

Mom and I are thinking of you and your family. We’re praying for peace and healing. We will talk soon. Much love…

My memories of Bill is man with full of happy energy, kind and fiercely protective father. I met him as a impressionable teenage immigrant to this country. Bill was the introductory image of the American father figure forever embedded in my head. Thank you for your kindness and Rest In Peace. And thank you for Sharon being in my life.

I have such fond memories of my cousin Bill, especially of the time when he and his wife Bobbie visited Ireland in 1964. I thought they were such a glamorous couple. In 1970 they welcomed me into their home in Connecticut and gave me the holiday of a lifetime. Bill was kind and generous. He loved his family unconditionally and was proud of each and everyone of them. Rest easy now Bill with those who have gone before you, especially your darling Bobbie.

Paul and Lauren Steves
10:40am

Our Thoughts and Prayers are with the entire O’Donnell family . Bill was a wonderful man and will be dearly missed. He is now with his dear wife “Bobbie”. Rest in Peace Bill.

My sincere condolences to the O’Donnell’s family

Papa you were a good example of a hero. Even at 90 you were still strong and independent you. You were so loved by every caregiver who cared for you. They always had something good to tell people about you. I especially will never regret working for you. I love you so much papa and I wish you were still here with us. Miss the fun walks to the poolside and to the fireplace and how every one we meet on the hallway will greet you with such a big smile. You were a grandfather to us and a father to many other nurses who cared for you. You and your children have shown us so much love and concern and have taken us to be their own family. Thank you for all you did for me and all the encouragements during my school days. I know you are proud to know I finally made it through school . Yiu always said you will write such a good reference and recommendations to any employer of my choice. I will never forget you . Adieu papa

Uncle Bill was always kind, gentle and entertaining with us children. He was a natural leader and had a great smile and laugh. My Dad and others would tease him and Billy would just laugh and not back down.
Watching the genuine affection that Uncle Bill, Dad, Uncle Buddy, Jim, Brother Luke, Uncle Ed, Uncle Tom, Cousin Jess and many others all had for each other, even amongst the teasing and debating, was quite an education for an impressionable young man. God Bless you Uncle Bill and Aunt Bobbie and all the faithful departed.

The Roney family was connected to the O’Donnell family through several veins and their were funny and fun loving folks in both families. They had lots of parties but I especially loved the parties when Bobbi and Bill were in town! My condolences to the lucky children and grandchildren that had him for so many years.

Our prayers and thoughts are with the O’Donnell family. He was an amazing man and will be missed

Wonderful Bill and Bobbie! My heart remembers how the two of you glowed whenever you spoke each others name or when they were with our Circle. Bill loved to surprise Bobbie with little gifts especially Beanie Babies and Bobbie truly glowed as she shared each new surprise. My life was enriched in knowing them. Bobbie and I were members of Holy Spirit Circle and our husbands helped in the electronic section of our annual garage sale to raise money for the Oblate Mission. I thank God for their friendship.