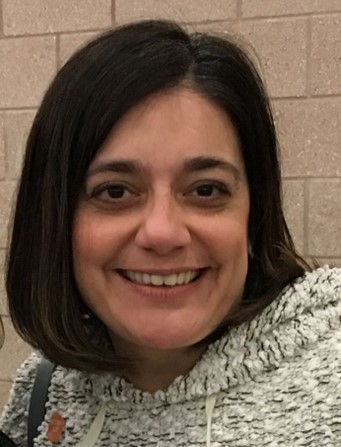 Amalia Garcia Ayers, age 44, of The Colony, Texas, passed away peacefully at home on Wednesday, January 27, 2021, after a two-year battle with cancer.

A bilingual Celebration of Life service will be held at 11 a.m. on Saturday, February 13, 2021, at First Methodist Carrollton, 2201 Hebron Pkwy, Carrollton, TX. It will be livestreamed to https://facebook.com/fmcarrollton/live and https://youtube.com/firstmethodistcarrollton/live.

Amalia was born on March 15, 1976, in Baytown, Texas to Oscar Garcia and Irma Quintanilla. She spent most of her childhood in Baytown, until her parents separated and she moved with her mother to Brodhead, Wisconsin. She graduated from Brodhead High School in 1994. Not long after, she met and married her husband, Chris, in Bellevue, Ohio on December 7, 1996. They were blessed with two children, Gabriella, age 23, and Wyatt, age 20. Amalia and family continued to live in Bellevue, Ohio, where she obtained her bachelor’s degree in Early Childhood Education from Lourdes College of Sylvania, Ohio, in 2010. Amalia relocated with her family to Texas in 2010. She started her teaching career at Lee Britain Elementary, Irving, Texas in 2010 and switched districts in 2016, teaching at South Ridge Elementary, Lewisville, Texas. Amalia and her family were active members of First Methodist Carrollton, where she served on the missions committee and in many other areas. She was an avid reader and book club enthusiast.

Amalia is survived by her husband, Chris Ayers, their children, Gabriella & Wyatt, her mother, Irma Quintanilla, and Chris’ parents, Dottie & Jim Pickering of Bellevue, Ohio, and Ed Ayers of Columbus, Ohio. She is also survived by her sisters Irma (Felix) DeLeon, Amparo (Jesse) Maldonado, brothers Luis Salinas and Gavino (Jessica) Garcia and many nieces and nephews.

In lieu of flowers, gifts may be made to support breast cancer research via the BSW Dallas Foundation. Please designate for the Amy T. Selkirk fund to support the research being done by Amalia’s doctor. Give online at https://dallasfoundation.bswhealth.com/ways-to-give/donate (select “Other” in the designation field and type Amy T. Selkirk fund in the next line) or mail to the Sarah Burdi, CFRE Director, BSW Dallas Foundation, 3600 Gaston Avenue, Suite 100, Dallas, TX 75246 (write “Amy T. Selkirk fund” in the memo line or with accompanying note).

Mrs. Ayers was an amazing teacher who truly loved what she did and her students. I always looked forward to spending time in her classroom, talking to her in the hallway and helping her with a student in need. Prayers for the family, friends and students.

From the first day we met, you won my heart and have brought joy to our family. I love you my daughter. You’ve earned a heavenly rest. Pappy Ayers

Thank you, Amalia, for always making me smile,no matter how difficult the day might have been. Being in your classroom, seeing your acceptance of all your students and all the attention you put
into making everything work was indeed a pleasure. Your
positive attitude toward life was refreshing. I can hear that
big laugh now, and I know everyone up there is enjoying your company! I miss you!
Love, Phyllis Baidy

So sorry for your loss

Chris and family, you are all in my thoughts and prayers. May your memories bring you comfort.

I always enjoyed our conversations about our kids and their milestones we would talk about, their school activities, and how we worked to fit it all in everyday. We had some great laughs about school, family, and life. We use to say you can’t make this stuff up, and we need to write a book about all our experiences in school. Laughter was always the best medicine.

Kathy and I want to share our deepest sympathy to you all. Amalia was such a kind, sweet soul!

Chris and family, please know you are in the hearts of so many people here in Bellevue. Whenever I think of Amalia and your family, it is always with a big smile. Amalia had such a good heart, thoughtful caring soul and love for you all. We are all blessed to have known her. Sending you prayers for peace and comfort.

Chris and family, My sympathy and prayers as you say good-bye to Amalia. She was always smiling and friendly. I wish I had been able to get to know her better and I wish she had had more time here with all of you. She will be missed greatly. My love and prayers.

Joyce and Roger Kinney
10:40am

Our prayers and sympathy, Dhris, Wyatt and Gabby. Amalia was such a o wonderful, loving person and will be sorely missed by many..

Our thoughts and prayers are with you. You are such a special family and it was a pleasure to meet beautiful Amalia. What a wonderful teacher and wife and mother she was. God Bless your family and hold you close to Him.

Mom and Jim are thinking about you and praying that God will give strength and guide you along this very difficult pathway in your life. We loved Amalia so much. She was a joy to have in our family. We will miss her and all we shared throughout the years. Our hearts are broken for you, Gabby and Wyatt. Love you all. Mom and Jim.

Patrick and I are sending Chris and his Family our deepest Sympathy for the loss of their sweet Amelia… While there are no clever words to ease their pain, may they find comfort in knowing that she is now with The Lord free of pain and suffering. Her memory will never die… Love and prayers to Amelia and her Family… Claudine and Patrick

Mrs. Ayers was such an amazing teacher, I am blessed to have had the opportunity to meet someone as amazing as her.