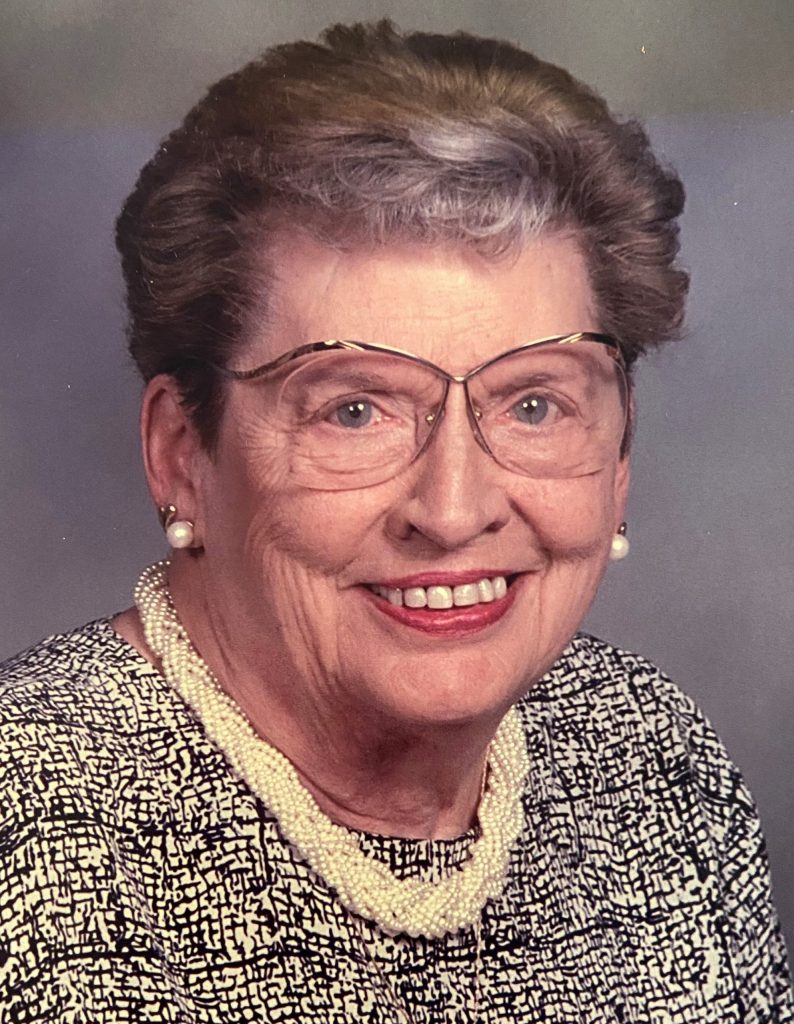 Earlene Sue Custer Gentry was born on December 15th, 1929 in Chickasha, Oklahoma, as the only child of Earl and Belle Custer. She passed into the loving arms of our Lord and Savior on April 26th, 2020. Earlene and her parents moved to Holdenville, Oklahoma in 1934 where she was raised her entire childhood and on into adulthood. Earl was the local franchise owner of the JC Penney store in Holdenville. While Earlene was never blessed with any siblings, she had the good fortune of being the “Matriarch” to 25 or so first cousins. Family was everything to her.

Earlene graduated from Holdenville high school in 1948. Her accomplishments per the Wolverine yearbook were National Honor Society, Honor Senior, Honor Acapella Choir, Band Queen, Wolverettes, along with numerous other positions held primarily related to music or drama. Earlene was an accomplished pianist and organist and religiously played the organ at First United Methodist Church in Holdenville throughout high school and college. Upon graduation from high school, Earlene traveled to Columbia Missouri to study music at Columbia Christian College for women. In the summer of 1950, Earlene returned to Holdenville to marry her high school sweetheart JB Loftis. JB was drafted by the US Army to serve in Korea shortly after their wedding. JB was killed in the line of duty on December 1st, 1951. There were no children born to Earlene and JB.

In the fall of 1952, Earlene went back to school in Norman to attend the University of Oklahoma to finish up her music education degree. Her goal was to be a high school music teacher. Somewhere along the way she caught the fashion bug (due to her upbringing working in her Dad’s JC Penney store) and in 1953 moved to Dallas to start her career in fashion merchandising. She initially worked for Ike Clark of Dallas and gave her first of many fashion style shows in 1954 at the Adolphus Hotel in Downtown Dallas. Later that year, she joined JC Penney (JCP) to become a millinery women’s hat buyer and eventually transitioned into women’s sportswear. That is where Earlene met Ira “Neal” Gentry, the love of her life. Earlene and Neal were married on May 4, 1958    in Durant, Oklahoma at the First Methodist Church. Earlene and Neal were married for 35 years before Neal’s unfortunate passing on to our Lord on November 18th, 1993.

Earlene retired from JCP after their wedding due to nepotism guidelines and in 1959 began her greatest calling “Mom”. A mother of great magnitudes. Mom, Mother, Mamma were the endeared maternal names called by her 3 children.

JCP took Earlene and Neal to 3 different states over the years, as she was a devoted mother to their three children, Boyd, Jeff, and Gina. In the late 1970’s Earlene took her real estate test, obtained her license, and began her next calling as a Real Estate Agent. She sold homes to countless families in 3 different cities in Kansas and Texas for almost 20 years. Her selfless, caregiving attitude loved serving families and of course she won countless awards in this career too.

Earlene moved to Lakeway, Texas outside of Austin after Neal’s passing to enjoy retirement, golf and travel with several of their JCP lifetime friends. She enjoyed 15 years there until she moved back to Dallas in 2009 due to her declining mental health and battle with Dementia/Alzheimer’s.

Earlene was a musician, a fashion diva, a social queen, a worker bee, a historian/scrapbooker, a caregiver and a faithful follower of Christ. Her nicknames were vast….Suzy Q , Little Earl, Matriarch, Babe, Nanny, the Nanner, and our personal favorite “ The General”. She was a strong woman of character, perseverance and hard work….but most importantly a selfless giver of LOVE to her vast number of friends and close-knit family.

She fought the good fight until our Lord took her home. Well done my good and faithful servant. WELL DONE!

Do not fear, for I am with you,

Do not anxiously look about you, for I am your God.

I will strengthen you and I will help you,

Surely, I will uphold you with My righteous right hand.

The Lord bless you and keep you;

The Lord make his face shine upon you and be gracious to you;

The Lord turn his face toward you and give you peace.

Earlene wrote these words to her family in one of her famous of many scrapbooks.

To the living, I am gone

To the sorrowful, I will never return to Earth

To the angry, I was cheated, but to the happy,

I am at peace, and to the faithful, I have never left.

I cannot be seen, but I can be heard.

Remember me in your heart, your thoughts and your memories of;

For if you always think of me, I will have never gone.

The family would like to thank all the caregivers and executive staff at Monticello West (MW) who loved and cared for our mother abundantly over the past five years and especially at the end of her life on this Earth. In addition, we would like to thank Total Hospice and Palliative Care (THPC) for their dedication and sacrifice to our mother for 6 months in 2019 and the last weeks of her life in 2020. Caregivers from MW include but not limited to; Josie Winland, Shelly Davis-Dollins, Lisa Bertuzzi, Nan Mulvaney, Sandra Branch, Emily Johnson, Brandy Rayford, Kamaria Hampton, Delilah Hampton. Caregivers from THPC include; Joe Johnson, Jessica Challis and Toni Birdsong.

In lieu of flowers please make donations in Earlene Gentry’s name to;

Monticello West Employee Fund to the attention of Josie Winland

Total Hospice and Palliative Care to the attention of Lisa Higgason

She will be missed by everyone here @ Monticello West. We were blessed to have her as part of our family.

What a beautiful tribute Gina. Your family is in my prayers.

I had the honor of knowing Ms. Gentry for several years at Monticello West and have many wonderful memories of her. We shared a bond of having grown up in our fathers’ JC Penney stores and also as former Girl Scout leaders for our daughters’ troops. In her role as “The General” she marched into my office many times and “fired” me or gave me a list of tasks to do for the day. My favorite memory is of the time I showed her what a Selfie was and we put our heads together to take the picture. When I showed her the result and asked what she thought, she replied with characteristic honesty “I don’t like me and really, dear it’s not your best look either!” She was absolutely right and I showed her the miracle of the little trash can on the screen and deleted it. I am smiling at the thought of her giving the other angels in heaven fashion advice. Ms. Gentry was absolutely one of a kind and the world will be a less interesting place without her.