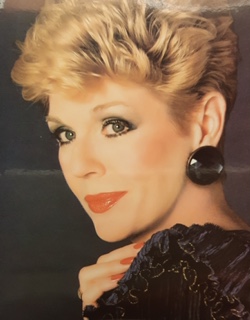 Marilyn Alice Reed Hailey, 85, died on July 04, 2019, in Dallas, Texas. Her valiant three-year battle from complications of a stroke ended peacefully at Presbyterian Hospital ICU in the evening of Independence Day.

Born June 21, 1934, in Dallas, TX, Marilyn graduated from Woodrow Wilson High School in 1951, and in 1955, from North Texas State University, where she earned a BA degree in Interior Design, and where, in September of 1951 she met the love of her life, H.M. Hailey, at a Sadie Hawkins Dance. They both proclaimed that H.M. pursued Marilyn until she caught him! That catch became official with their marriage on December 23, 1954, prior to Marilyn’s graduation the following Spring.

Thus began an adventure of travels and living around the United States and abroad. H.M.’s military career in the U.S. Air Force presented the opportunity for Marilyn to live in Japan, snow ski in the Japanese Alps, and in 1958, climb to the top of Mount Fuji. During her first week in Japan, accompanied by two other Air Force wives, Marilyn initiated her international living adventure by driving their 1954 Oldsmobile to Tokyo to meet a dressmaker – a trip that involved driving on the left side of gravel roads through small villages. In addition to Japan, Marilyn and H.M. traveled Mexico, Canada, England, Ireland, Scotland, Germany, France, Spain, Switzerland, Austria, Greek Isles, Croatia, Italy, Morocco, Denmark, Sweden, Estonia, Portugal, Turkey, Russia, throughout the U.S. and cruised across both big oceans and several seas.

But none of these travels and adventures compared to the joyous event on September 29, 1964, when Marilyn and H.M. were blessed with the birth of their daughter Leslie, who was a source of pride and joy to Marilyn throughout the remainder of her life.

Marilyn’s career as a Fashion Model spanned an amazing time period of 36 years – from 1960 to 1996 – extended from Dallas, TX, to New York, NY, from Seattle, WA, to Washington, D.C., and encompassed work with major fashion houses (including the prestigious Teal Traina Fashion House in New York City), events, and publications in several major cities across the U.S. Her modeling career included Runway Modeling, Tea Room Modeling, Trunk Shows, and a World’s Fair, as well as Print and Photo Publications. She worked with such notable agencies and establishments in Dallas, TX, as the Kim Dawson Agency, Neiman Marcus In-House Couture, Nordstrom’s, Stanley Korshak, Saks 5th Avenue, Dillard’s, J.C. Penney and Neiman Marcus Greenhouse where she was a fashion coordinator. Marilyn was the preferred model of Frank Olive Hat Designs of New York City, modeling the Frank Olive creations at all of the Dallas, TX, Neiman Marcus locations.

Marilyn appeared in Vogue Magazine, as well as ads featured in Southern Living, D Magazine, Time Magazine, in newspapers in Washington, Seattle, Chicago, Denver and Dallas, and in billboard-sized ads in airports across America.

The favoritism that hat designer Frank Olive showed toward Marilyn as his model of choice resulted in her accumulating an impressive collection of Frank Olive hats, a collection that was featured in a 2013 news special on Channel 8 in Dallas, TX. Over the course of her career, Marilyn acquired an extensive array of Designer Gowns, Dresses and Suits as well as her assembly of designer hats, and in 2018, a selection of those, dating from the 1960’s through the 1980’s, were donated to the University of North Texas School of Fashion Design Permanent Collection.

While living in Japan, Marilyn studied and received a Master’s Degree Certificate in Japanese Flower Arranging, a skill set and knowledge base benefiting her during her tenure on the Woman’s Council of the Dallas Arboretum and in the Dallas Museum of Art League, where she was a past president. Marilyn’s service and philanthropy also included the Dallas Symphony Orchestra League; A.W.A.R.E.; P.E.O. Chapter BZ-GC, past president; Mary K. Craig Class, Dallas; Preston Hollow UMC, where she was a member of the choir and served on many committees.

Marilyn is survived by her beloved husband of 64 years, H.M. Hailey; her daughter Leslie Hensch and husband, Carl Hensch; many loving in-laws and extended family members; and a lifetime accumulation of friends who respected, loved, and admired Marilyn for the amazing, accomplished and incredible person she was.

Marilyn was preceded in death by her parents and by her brother, David Alan Reed.

In lieu of flowers, the family requests that Memorials honoring Marilyn’s memory be given to one of her favorite charities: SPCA of Dallas, DMA, A.W.A.R.E., or Preston Hollow United Methodist Church, Dallas, TX.

Travis and Carol Nevill
10:37am

We will miss Marilyn’s beautiful smile. Our sincere condolences to you H.M. Love.

Marilyn will always be a remembered friend from high school. May your memories help allay your grief at this saddest of times.

Marilyn was my P.E.O. sister in Chapter BZ. She was a beautiful person in every way.

Marilyn was both charming and beautiful. I will miss her sweet nature. She was very respected and loved by her friends.

Beautiful Marilyn, inside and out. We will greatly miss you. H.M., our prayers are with you during this difficult time. Much love to you.

Having gone through what the family is experiencing now is beyond description and console right now.
What a long and wonderful life you had together. Marilyn was not only a beauty, but a very sweet soul. She will be missed by all who knew her.

She loved Christ, and he now gone to him forever. Although I had not seen her in the many years (41) since I was appointed to other churches, my wife and I have always remembered her as a beautiful person inside and out. May God’s healing peace be with you all. Rev Dr.Michael Daves and Patty==

Sending our sincere condolences to you, H and Leslie. We only knew Marilyn from Misty’s dance class but we will always remember her gracious presence and her beautiful smile.

What a sweet soul she was. And it was so special and touching to watch H.M. and she relate. We loved going to their house and seeing the hat collection! They were an inspiration to all of us for their graciousness. Mary Ellen

What a beautiful lady Marilyn was. Her grace lives on through Leslie and I know she is so proud of her in every way. Much love…

Our thoughts & prayers are with your family.

Life without Marilyn seems inconceivable, but knowing she is with our Lord in Heaven is comforting and knowing we will see her again. Marilyn was the epitome of grace, always stunning and a smile that warmed every heart it touched. My heart aches for HM, Leslie, family and friends close to Marilyn. She will always be loved and missed.

Our dear friend, Marilyn will be missed forever. We will miss our fun times we had with Marilyn and HM and they were many. Marilyn was one of the most beautiful inside and out friend! Marilyn was so kind hearted and I am so happy that we were blessed with her loving friendship.