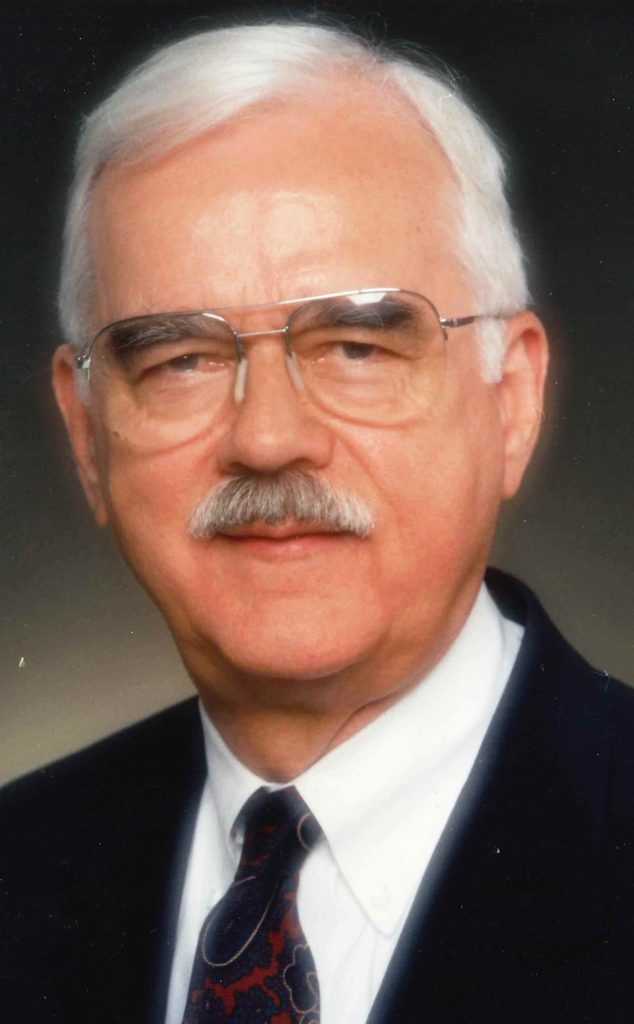 Arlis Elwood Ede died peacefully in his sleep on Wednesday,  April 26th at the age of 92, surrounded by family.

Arlis served in the United States Air Force for 2 and one half years during World War II and a year during the Korean conflict. After graduating from the Art Institute of Chicago with a degree in Interior Design, he moved to Dallas in 1952. He worked for Adleta Showcase Company, Joe Lambert, and George Dahl Architecture before opening his own firm Arlis Ede Interiors Inc. where he created commercial and residential Interior Design projects.

Arlis was active in the Interior Design professional organization ASID where he served as Texas Chapter President, on the National Board and as Regional Vice President. He was an ASID Fellow. Arlis was also active in Interior Design education serving on various committees of FIDER (the accrediting body for schools of Interior Design) and served on the FIDER’s board.

Being a lover of family and history, Arlis instilled the same in his children and grandchildren. He researched the genealogy of his Norwegian roots and was also involved and committed to Kathyrn’s German ancestral heritage. Every two years at Kathyrn’s family reunion he made it a priority for his family to be there and learn the lessons from those who had gone before, keeping their legacy alive.  Arlis kept in touch with his nieces and nephews in Wisconsin weekly and cherished those relationships.

Always positive, curious, and creative, Arlis and Kathryn built a home and life together where their sons flourished, grandchildren thrived and where his legacy endures.

Memorial service has been set for Friday, May 11, 2018 at 2:00 pm in the Wynne Chapel at Highland Park Presbyterian Church.

Learned from Matt about Arlis’s death. We are out of town currently, but the Ede Family is in our thoughts and prayers. David, would you save a funeral program for me? Will miss my visits with Arlis about all things Mondovi.

Arles was a talented and kind man! He worked on two of our homes and was a pleasure to work with.

Dear family, I wanted to send my condolences on the recent death of your father. He and Katherine were dear friends in our church, Highland Park Presbyterian Church. Arlis helped us to decorate our new Dallas home at the Park Plaza in 1988 and we have not changed a single thing, other than to add paintings and recover some furniture in the same fabric. Arlis and my late husband Louis enjoyed sharing their Korean Was memories.Several years ago Arlis helped a committee of Park Plaza residents to redecorate the lobby of our building and he was much admired by the committee. Always a gentleman! I shall miss weeing him at church. A life well lived. Lovingly ,Elsie Dunklin

Arlis was a talented and gracious gentleman whose kind spirit will be missed. His contributions to the beauty of the Highland Park Presbyterian Church campus were tremendous and always done quietly. His kindness to me personally will always be remembered and appreciated. I am sorry that his family has lost such a lovely man and hoe they will keep his memory alive for the next generation to emulate.

I will miss seeing Arlis at church. He helped us once with a design, and I always enjoyed seeing Katheryn and him . They were lovely friends.

Artis was a great friend to the interior design industry in Dallas. No matter how busy he was, he always had time to visit with young designers giving much appreciated advice and always ready to hep them find that all important first job. He was a kind and caring soul and will be greatly missed .

Praying for family there and for our Kinsfolk who are traveling for the celebration of Arlis’s life. May our God give you His strength and peace as you mourn.

How I loved Arlis and your Mom. He and Scotty Rodgers were my “pew mates” each Sunday and gave me such joy and love. I have missed him so, but know a joyful reunion in heaven. May the Lord give you comfort and mercy .

We have such wonderful memories of
both your parents at our church &
estate sales through the years. They were a very special couple and
will be missed by many!

Our first associations with Arlis and Kathryn were HPHS PTA matters when Carl and our daughter Emily were in the same class in the 1970s. Fast forward to 2007 when Arlis came to organize my chock-full-of-stuff house for the estate sale when I downsized after my husband’s death. Emily and I were so glad to see him and to renew our friendship from earlier years and he was invaluable in that undertaking. When that was completed and I was moving, Arlis came right along with me to sort what I could use and where in my much smaller house, arranged it all for me, tended to fabrics for all the well-worn furniture that needed repair/reupholstering, sorted through zillions of family pictures to select a few to hang, helped decide where to hang what in every room without purchasing a single new item and made a tremendous chore a delightful undertaking. Such a gentleman with a keen sense of humor! The loss of Kathryn and Arlis leaves a gap in the community as well as in their family.

I was sorry to just find out about the passing of Arlis. I had the pleasure to speak with him by phone for a few years as we discussed our family heritage. His grandfather was a brother to my great grandmother. I will surely miss him and our discussions.

Missed the news. Talked to him not long before passing. He sent me the Ede family history with stories of grandmother Ellie. He was on a mission to get that done. When I moved to Dallas as a young college kid, I appreciated having family there. Spent several holidays in the Ede Home. Great memories. Much appreciated.

I see his tall gangly goofy self with a smile. He showed me how art and diversity can open someone’s mind. I’ve many great memories that I will cherish and smile in remembrance. My heart felt affection to you all.