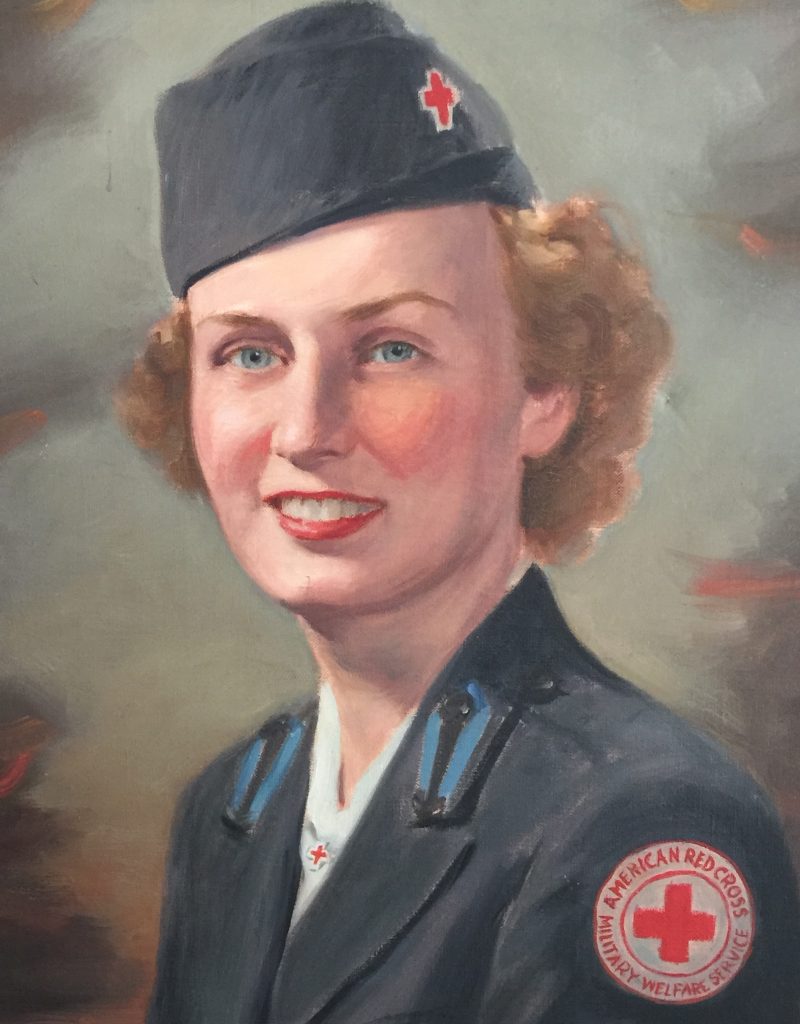 Janet Wright Dillon Blair 11/30/1918 to 02/16/2017 was born in Leominister, Massachusetts to Janet Ansel Wright and David Francis Dillon.  She attended Fitchburg schools, Crocker Elementary, Fermata  School for Girls in Aiken, SC and then Vassar College graduating in 1941 with a major in German Language.  After Vassar, she enrolled in Washington DC to the Red Cross and was sent over to the European arena where she served as a Red Cross Donut Dolly all around Europe finally landing a permanent position attached to General George Patton’s Third Army.

WWII was the defining time of her life. Along with the immense suffering she witnessed, it also presented her with a pride, a commitment to patriotic service, sacrifice, and duty. She had the ability to cheerfully engage with those whose fates were already scripted. From privates to the multi-starred Generals, she was fluid with each and every ‘ Yank ‘ she encountered. Until her dying day she busied herself with her memoirs, her photographs, and her life during that tumultuous era.

She returned from the War and enrolled in a secretarial school working in New York City for a medical group and married soon afterward to Drury Shelton Blair MD.  They relocated to Dallas, Texas where her husband began his practice.

She threw herself into her interests and hobbies with enthusiasm – a life long knitter of sweaters, a photography buff, a seamstress who made her own patterns and clothing, an avid golfer, and an adventureous world wide traveler.  At Brookhaven, she was club champion 1977, 1978, 1980.  She went on golf trips to Scotland playing St. Andrews as well as Mexico; and on photographic safaris to Greece and Egypt and Africa. She was Super Senior champion 1991 at age 72 in Houston, Texas. She established a business renting walkie talkies, first through the Civitan tournaments in Dallas and then broadened her scope when Dallas boomed during the 1980s.

She was a member of Daughters of the American Revolution, The National Association of Colonial Dames in America, and the Mayflower Society. She was also a PGA Rules Marshall.

She leaves behind 3 children, Katherine Blair and her son, Drury (Dahania), Peter Blair (Paula) and Joseph Blair (Catharine), and his daughters, Roseanne and Madelyn Blair.

In 2004 accompanied by her son, Peter and daughter-in-law Paula, she traveled back to France for the 60th anniversary of the Allied invasion, where she was treated as a hero.  She was honored and presented with a number of awards, reviewed the assembly of the French townsfolk dressed in reenactment regalia, made a speech or two (in her Bostonian French), and had a restored Club mobile named “Dallas“ after her honor. During that trip, she was made the Guest of Honor of the French reenactment troops.  She would tear up recounting this to all who would listen. Besides her family, this was her treasure.

People who were close to her know she was quite a character. Her talent for jokes (often quite bawdy), puns, double entendre’s, her breadth of knowledge on everything from The Arts to sports, her fondness for the English language, and her curiosity for technology kept her engaged with all things new, drawing in new acquaintances immediately.

She deeply cared for those around her, helping others often with secretive assistance when they were down, and always remarked how lucky she was, eternally thankful to God for her blessings.

Arrangements have been made through North Dallas Funeral Home. Services will be private and her internment will be at Restland Memorial Park Cemetery.

In lieu of flowers, the family asks for donations to be made to the American Red Cross.

Janet was one of the most interesting people I have ever met.I was always amazed by her intelligence and her knowledge of what was going on in the world.I always looked forward to our visits.
My sincere condolences to the Blair family.

Janet meant so much to my mom. She always greeted me with a warm smile. I know she’ll be missed.
Pat Mittenthal