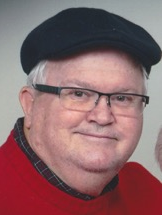 Bill was born on February 25, 1943 in Anadarko, Oklahoma to Estle and Pearl Henderson. He was the baby of the family with seven older brothers and a sister. He grew up in a little house on College Street, casually attended school and met Karen Bentley while working at the Cashway Grocery store. Bill joined the Army in 1961 and served for three years, stationed for a year in the remote mountains of Korea on a missile base. On August 14, 1964, he married Karen Bentley and the couple soon moved to Dallas, Texas.

Bill spent years working in graphic arts in the pre-press area at several printing companies prior to embarking on a career as an artist. Completely self-taught, he primarily sculpted western art and wildlife, influenced heavily by the native American culture that surrounded him in his youth. His bronze sculptures were collected and displayed throughout the Southwest in art shows and galleries. Bill’s interests were as wide and varied as his considerable artistic talent. Bill was a voracious life-long learner, fascinated by God’s creation from the microscopic to the galactic. In nearly every field or interest that captured his attention, Bill was a self-effacing expert and generous teacher. He was an avid amateur astronomer, a collector of microscopes and optics, a masterful wood turner, world-class macro and micro photographer, lapidary artist and jeweler. He could also shoot a dime with a .45 pistol. He shared his time and talents as a teacher and friend to anyone interested in his varied pursuits.

Beyond the stuff and his natural curiosity, and there was a lot of stuff and endless curiosity, Bill loved his family. He and Karen would have celebrated their 52nd anniversary just eight days after he passed away. He was great dad, and passed on a slightly off-center sense of humor to his kids and made countless sacrifices for his family. He was an especially proud Papa and Grandpa and delighted in spending time with his grandchildren. His most enduring legacy to his family occurred in 2001, after spending what he described as “his forty years in the wilderness” spiritually, when he accepted his new life in Christ. He was led to faith through his relationship with Pastor Joe Dennis and soon publicly proclaimed his faith, baptized at Webb Chapel Baptist Church. He was 58 years old at the time of his baptism; he told those in attendance that it was never too late to trust in Jesus, but urged them not to be as stubborn as he was, a great testimony to God’s patience and power to move us to a saving knowledge of Christ.

“Brothers and sisters, we do not want you to be uninformed about those who sleep in death, so that you do not grieve like the rest of mankind, who have no hope. For we believe that Jesus died and rose again, and so we believe that God will bring with Jesus those who have fallen asleep in him.” 1 Thessalonians 4:13-14 NIV.

A memorial service to celebrate Bill’s life and homecoming will be at 3:00 p.m. on Thursday, August 11, 2016 at The Ridge Church, 4561 North Josey Lane, Carrollton, Texas.

In lieu of flowers, the family respectfully requests that you would consider a donation to Metro Relief, a local ministry to the homeless and underprivileged at www.metrorelief.org

Bill will always be remembered as a kind man, wonderful father, and husband, and a great neighbor. Although we haven’t talked with the Hendersons in awhile our thoughts are always with them. Prayers during this hard time and Godspeed Bill!

Karen, I am so sorry for your family’s loss..Bill was a kind man and will be missed very much..Prayers for you and your family.

Bill, you have been like a brother to me, and though you are no longer suffering I am selfish – I still want you here with us. You and I had so many more projects to work on, so many more rocks and mineral specimens to look at and acquire. You are already missed. Thank you for coming into my life when I needed you.

I was blessed to grow up 3 houses down from The Hendersons which fortunately made me an honorary Henderson. I will never forget the acceptance, love, silliness,knowledge, and of course, the sometimes stern, always with positive intent, lessons Bill gave me as a kid. He had the best smile and seriously was one of the smartest men I have ever known. He was my second dad, and my life would not have been the same without knowing him. I thank God for that and pray for his family’s peace and acceptance. I love ya’ll!

May God bless you with every blessing in Jesus as you walk this grief out day by day.
Much love,
Carol & Jerry Duvall

Bill was great. Taught me and Carolyn how to tie up grasshopers. The grasshoppers were always volunteers. Usually after that he locked Carolyn in the cellar.He was five years older then Carolyn and me and we impressed with him. I stayed impressed. He we a wonderful man and uncle and friend.

May GOD give Karen and all his family peace in this time of sadness. Bill is already with GOD in heaven, because even in life he was an Angel to so many of us. We loved him and admired him. RIP and start a class in heaven in Lapidary.

Mark and met Bill through the Dallas Gem and Mineral Society. We loved talking with Bill. He was so knowledgeable about so many things. We will miss him. Our prayers are with Bill’s family.